Board games and a medieval setting; the cheese and crackers of the table-top! Farming! Economics! Commerce! Mayhap some flax! But beneath the cheerily constructive historical tinkering, there are avaricious, power-hungry backstabbers lurking in the shadows. Hold onto coin purse strings, we’re going to Slyville.

The third title from relative newcomers Hexy Studio (Star Scrappers: Cave In, Hard City,) Slyville sees 3 to 5 rival guilds racing to gain influence over the titular medieval town. If you can successfully balance bluffing, timing, and the judicious application of blade to spine, then you’ll become the favoured guild of the capricious Prince and win the game. The city, rendered by Przemysław Gul, and given colourful life by Gul and Tomasz Larek, helps distinguish medieval Slyville from the multitude of similar settings. I especially enjoy the threat of the sawn-through stool on the Sabotage card. 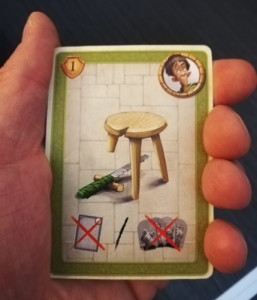 The heart of the game is a deck of seven cards, and the decisions, not only of which four (three in a 5-player game) you will play, and into which districts, but the manner in which you do so. Poker-face an Acquisition card into an uncontested spot to gain a good you need later, quietly seed a district with a Sabotage card to protect your upcoming Big Deal, or mislead the table by boldly slapping down a hopeless Small Deal; all the while trying to read your opponents’ moves and keep track of what goods lie on each player’s board. Once the districts are resolved, the cheesy grins and muttered cursing around the table will tell the truth of each game’s turn. The Prince’s Favourite (First Player) has the opportunity to further meddle by seeding the board with a Prince’s Decree, it’s effect on the turn known only to them until the latter phase of the turn, when the regions are resolved.

There is a lot I like about Slyville; Its engaging mix of forward planning, reading the table, bluffing, and luck reminds me pleasantly of Mission: Red Planet. It’s easy to learn, moves along at a fair clip, and always proceeds toward the 100-point goal, eschewing the grinding tug-of-war of games like Munchkin. Nobody is ever out of the race for long, the players don’t fight to balance the game, the board state doesn’t change chaotically, and your seven cards return to you each turn, ready to scheme anew. Similarly, your goods-gathering Henchman might be displaced, or exiled from the city entirely, but are soon back in the fray with a timely Takeover card. The Prince’s Favourite  resolves ties, and may be influenced by the other players, but we found they frequently default to supporting their own interests, or those of the player in the weakest position.

If this seems rather mild, it’s because it rather is. 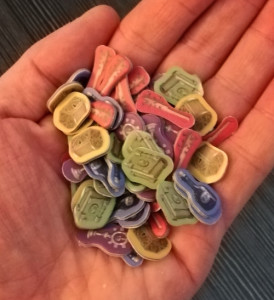 The wealth of a city, in my ham-like grasp!

Slyville’s metagame revolves around convincing the Prince’s Favourite to act in your favour, or against an opponent. The only tools available to do this are promises of mutual back-scratching, or Brutal threats. Our group found that with the lack of any concrete bribes, table talk had minimal impact, but other groups may bring this aspect to life. There’s definitely a niche for a ‘mean family game’ where the stakes feel lower, the penalties less harsh, but Slyville has traded some drama along with chaos, to achieve its aim. This reduced amplitude between the peaks and troughs of glee and frustration risks the game falling between the cracks if it doesn’t reach its audience quickly. This is, I feel, the biggest challenge facing Slyville. With almost 10,000 games being produced annually, the window for a game to make its mark is extremely slim. Slyville feels complete and well-realised, appealing without gimmickry, or acres of plastic, though it can feel that this fox is stealing chicken nuggets, not raiding the hen house. 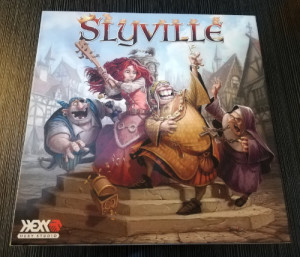 We built this city on enforced acquisition of material goods!

If the sneaky city of Slyville intrigues you, pre-orders will be open soon, and Hexy Studio will have final production copies ready at Essen 2019, booth 5-K105.

Notes on components:
This preview is of a prototype copy of the game. The art is close to finalised, but the components are subject to change. The iconography is clear and logical, though the colour-blind-proofing of the game could be improved if it extended to the player boards and main board districts. I would like to see the Goods tokens matched to the squares on the player boards, as they’re currently very small. I’d also like to see the Takeover and Goods Pile spaces on the main board outlined identically to the card placement spots for consistency’s sake. It was pointed out to me by another player that the art for Ulrika Krieger (Red Ruffians Gang) has her head in an impossible position and angle, and I cannot now un-see it.

Disclaimer: Hexy Studio kindly supplied a prototype of Slyville for the purpose of this preview.