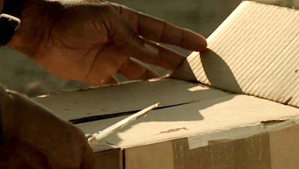 Things you find in boxes at the movies

Boxes. Let’s be honest. At some point in our lives, we’ve all sat back and wondered about them. You know, like you do. Oh, you have? Then you and I, reader, are on the same page. Here’s five of the best (and possibly only?) boxes you’re likely to find at the movies – enjoy! Hi Brad! Kevin Spacey is such a generous, thoughtful man. After leading Tyler and God on an eventful, fun-filled chase, he thanks them both for being good sports with a gift. And he didn’t just hand it over in the bag the lady at the checkout placed it in. He boxed it up. THAT’s thoughtful.

True fact: After Se7en’s big box office rake, New Line Cinema attempted to cash in further with kids everywhere by producing, the Gwyneth’s head-in-the-box toy. No production photos are available on the net, but just think this. Forget those sunny by-the-beach cut price holiday deals. Want something new? A gallery of holiday snaps to really shake up your Facebook profile? Then solving the puzzle box is for you. It’s a key to the entrance to Hell. And the best part of the holiday – you know exactly what you’re getting, so if it’s actually fun, it’s a bonus! I hear some of the tourist attractions are amazing. Some rides may have minimum height restrictions. Closed on Sundays. The end of Con Air grates with me. The bunny is burnt, filthy, narrowly misses floating down a drain entrance, covered in germs – and Cameron Poe still hands it to his baby daughter. You know what that kid is going to do now? She’s going to put her fingers in her mouth. And after the cops have quizzed Cameron all night, he’s going to take his wife and daughter to some late night McDonalds and eat. With their hands. His daughter will probably even feed some to the bunny, then eat those fries for herself. I mean really, is that responsible parenting?

But going back, yes, there’s a bunny. In a box. I watched this film many times as a youngling. I can still hum the theme. I also quoted ‘cobwebs’ at an age when I really shouldn’t have. But hey-ho, when Pheobe Cates finds a taped up jack-in-the-box in her childhood bedroom, she releases Fred, her forgotten imaginery friend. Madness ensues. Bogies are flicked. Princess Leia’s battleship is sunk. Rik Mayall rules.

True fact: A remake was announced in 2011, to star Russell Brand, who before filming can start I hope will himself be placed in a box. And buried. Forever. It’s best for everyone. Jack is such a charmer. He’s also a man of many sayings. His Batman best: Never rub another man’s rubarb. I’m sure he’s referring to Vivki Vale when preaching to Bruce Wayne, but another side of me likes to think he was giving out a cracking gardening tip. What psychopathic super criminal doesn’t have a vegetable patch? They need a healthy diet too. It’s important to have, y’know.

Fun fact: This Batman quote actually has its own Facebook page. I didn’t like it. And I’m not sure you should either.

Sidenote: I feel quite proud that I didn’t have to resort to box puns in this article… I could have folded. Flapped around with them. Sealed my fate. Made a reference to cardboard acting, failed to think outside the box, forced myself into a corner.