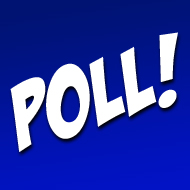 We here at DOOM Towers love to hear from our visitors. Partially because we have low self esteem and need to be told we’re pretty, and partially because you obviously have good taste so we can trust your opinion.

As a result, I have been tasked with testing the cultural waters, delving into the myriad popular opinions, having a look-see at the things you like to see, and textually probing your prefrontal cortex for your preferences on various matters both culturally imperative and wantonly irrelevant…In other words asking a question that only you can answer. Some may call it a poll but I call it THE MONTHLY RECKONING (a.k.a. NOT-Poole’s Polls)

This month, we ponder the end of days, since it is so very fast approaching. The apocalypse will probably not occur on December 21st, but its good to know where your priorities lie in desperate times. How would you like to spend your last hours being entertained? With only the first part of Tolkein’s There and Back Again? With secret agent-y explosions and spy-punching? With a kung-fu epic by GZA the genius? With a gripping musical about the French starring Wolverine and Catwoman? With the epic conclusion to a terrible…terrible movie series? With the comedy/caper/ensemble movie with a heck of a cast? Make your reckoning.

What pre-apocalypse movie do you most look forward to seeing? (pick three)