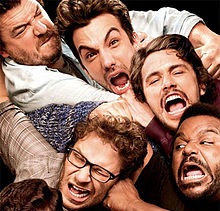 James Franco, Jonah Hill, Seth Rogen, Jay Baruchel, Danny McBride, and Craig Robinson. That’s the core cast of this movie. It’s completely ridiculous. Then there are smaller parts for pretty much everybody who is under 40 and makes comedy in Hollywood. Seriously, it’s ridiculous.

But, comedy is a weird beast. It’s not just the sum of it’s parts. It’s magic. Even the best comedians can make a dud. Or several duds (I’m looking at you Eddie Murphy).

This Is The End is an apocolyptic comedy where the previously mentioned actors all play themselves as the world comes to an end around them. It will either be sublime or it will become the legendary failure that will haunt them forever. Lets take a look at the NSFW second trailer for the film.

– Hey Cera, Cera. Whatever Will Be, Will Be.

Between this rather awesome looking cameo and the return of Arrested Development, 2013 could be a big year for Michael Cera.

It kinda looks like Aliens are the reason for all the destruction.

Or it could just be that God didn’t like the poster for a movie called “Ninja Rapist” as seen in this shot.

Movie sets are pretty much held together by gaffer tape. So it gave me a giggle to see an actor try and cover a wall crack with it.

Eagle eyed viewers would have spotted the very dinosaur shaped bad guy roaming through the kitchen.

No, I’m not referring to Craig Robinson.

I’m sure there are plenty of geek boys who got a boner at the mere presence of Emma Watson.

To me it feels a little cheap to be putting these cameos in the trailer though. They should be surprises for the audience rather than advertised beforehand.

Overall: I’m not sure I’ve learned all that much from the trailer. The movie still has the ability to be either terrible or wonderful and the trailer doesn’t convince me either way. But all the protagonists seem to be having fun and at the very least this should be a good “Friday night in with some pizza and beer” choice.