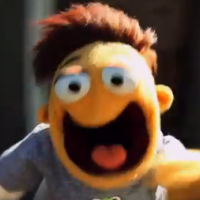 To say that I love The Muppets is the kind of obvious statement like saying I love my parents. The work of Jim Henson is just as influential in my beliefs and the way I live my life as the lessons my mother and father taught me about being a man. The Muppets are so ingrained into my consciousness that I still begrudge my girlfriend for not enjoying the show all that much. You need to have standards, you know?

Since Jim’s death however, the Muppet output has been patchy at best. Some movies have been good, some of been damn near blasphemous. And we won’t even talk about the attempts at bringing them back to TV. It seemed Jim was the only guy who knew what to do with them. Their humour and heart got lost somewhere along the way.

Disney own them now and have been trying to find a way to revamp the Muppets’ popularity. They began releasing short youtube videos with their interpretation of Queen’s “Bohemian Rhapsody” getting lots of attention. But you still felt that whoever was writing their escapades for the e-generation (or iGeneration, depending on what you like) are still trying to figure things out. It all felt a little awkward.

So up steps Jason Segel. Acclaimed for his Forgetting Sarah Marshall film which he both wrote and starred in. He is a noted Muppet enthusiast and felt passionate about trying to make a Muppet film. Is he the savior of the franchise? Will he return the Muppets to their former and rightful glory?

A teaser trailer has been released so lets have a look-see.

First of all, I get the joke. I just don’t think it’s a funny one. The idea of “cheesy-movie-parody-trailer-psyche-out” is not necessarily a bad one but in this scenario it doesn’t really work because it’s so ham-fisted it doesn’t really accomplish the task at hand. It doesn’t actually look like a bad rom-com because there was little or no effort to establish it other than the voice-over. If you’re going to make the trailer a fake one then at least go all the way and make it well.

Plus, it’s not even the plot of the film. It seems like a telling choice. You could poke fun at yourself or you can be so worried about showing people the actual plot of the film that you make up a different film to poke fun at… Really?

On a different note, while I’m sure a lot of this footage is probably not in the film, I would like to know who the hell drove into this classroom and how they think they’re going to park it like that without getting a ticket. – Woah, Woah, Woah. Stop. Is Jason Segel In This Movie?

And I think this is my biggest problem with the idea behind the trailer. For my editor’s sake I’m doing my best not to curse like a sailor (or a certain cartoon expert on this site). But the idea that they were so insecure about pitching a Muppet movie to the public that they had to be relegated to it’s background for the movie’s first trailer riles me to a level that I probably shouldn’t admit. Yes, I may be one of those rabid fans but when the film is called The Muppets and you decide not to lead with Muppets, then I can tell there is a problem with the film already. Sorry Disney, but you just don’t get it.

I like Jason Segel. I enjoy his work and he seems like a very nice guy. But if this trailer is anything to judge his attitude by (and after the Muppet reveal I think it’s safe to say we’re getting actual movie footage clips) then he is over-acting in this film and therefore being pretty disrespectful to the non-human cast surrounding him.

Jim Henson always wanted to convey that The Muppets were real people and that the world never thought twice about a frog talking to them. Every human acted naturally around The Muppets and vice-versa because they were real. Jim wanted us to believe they were real and damn it, I did. Jason Segel’s face is so cornball and condescending I pretty much want to ram my foot through it. Again, this is not a mark on him personally but professionally. We know he can act better than this so it’s an artistic choice on his behalf. It’s the wrong move and it doesn’t fit with the history of this comedy troop. Sorry Jason, but you just don’t get it. This is the character the whole movie is going to be based around. He’s new. Again, they couldn’t even base a film around the actual Muppets because they don’t know how to write them. They had to create a new one so they could figure out what to do.

I suppose you want me to write about my overall feelings towards the trailer and/or movie. You don’t think I’ve made them clear above.

To quote Token Black of South Park. “I don’t know. I don’t wanna know. I’m out.”