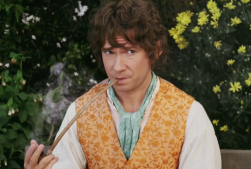 Oh god, where to start? Everything about this trailer is completely kick-ass. It’s as if Peter Jackson and company secretly filmed The Hobbit among the Lord of the Rings footage, and are just now releasing it. Now, I’m at the vantage point of not having read the book for 12 years, so I can’t remember details. But I loved The Hobbit, and this is just spot on.

First, we’re treated to some familiar faces from the LOTR Trilogy. Elijah Wood as Frodo, and Ian Holme as old Bilbo Baggins.

We get an intro, then Martin Freeman emerges as a much younger Bilbo.

From his opening lines, it was crystal clear that Freeman is just the right man for the job. He has the sort of mild-mannered, yet gruff disposition that’s just right. Then we’re introduced to the thirteen Dwarves, each very unique. I made a handy gif for reference to watch over and over again in case you get lost:

I briefly wondered how Jackson would be able to keep so many Characters balanced, but then realized he already did it with more characters in Lord of the Rings, so thirteen Dwarves shouldn’t be a problem. The Hobbit is a light-hearted romp compared to Lord of the Rings; LOTR is a dark epic tale, and Hobbit is merely a bedtime story, albeit a wonderfully grand and adventurous bedtime story. I’m happy to see Jackson seems to know the difference in tone between the two books.

Continuing, there are a few familiar faces and locals. The Shire looks just as it did when we left it.

Of course New Zealand looks just as much like Middle Earth as it ever did.

I’m not entirely sure what Galadriel is doing in this movie, as I don’t think she was in the book, but Cate Blanchett returns to her role.

"I was in the neighborhood."

Among other familiar delights we are treated to is Bilbo’s sword Sting in its heyday.

Some locales fans of the book will surely recognize: Mirkwood…

…and of course GOLLUM’S CAVE.

After introducing us to some new characters and showing us some beautiful panoramic shots, we are treated to Gollum’s reprisal; something that shoots chills up my spine.

Obviously since this is a teaser trailer, we aren’t getting everything. I can’t wait until Jackson gives us a full trailer! This is also only the first half of the story; we have to wait another two years for any inkling of Smaug the Dragon (played by Sherlock’s Benedict Cumberbatch).

Things to look forward to in the future: Stephen Fry as the Master of Laketown, Seventh Doctor Silvester McCoy as Radagast, the return of Christopher Lee as Saruman, Orlando Bloom as Legolas, Hugo Weaving as Elrond, and of course more Andy Serkis as Gollum.

It is worth noting that Saruman and Legolas appear nowhere in the book version of The Hobbit, so it’ll be interesting to see what Jackson does with them. Same with Frodo, I’m sure Legolas is only in the wraparound. I have a theory that he will help fill in some of the story concerning Galadriel and the elves.

Worth noting are the end credits. Not only is the writing team of Peter Jackson, Fran Walsh and Philippa Boyens back, but it appears Guillermo Del Toro also helped pen it during his involvment, so looking for his marks on the film should be interesting.

And not the post-converted crap, either. Every single picture you see in that teaser will be rendered in two-camera, Peter Jackson-shot, made-for-3D imagery. Sink your brain into that!