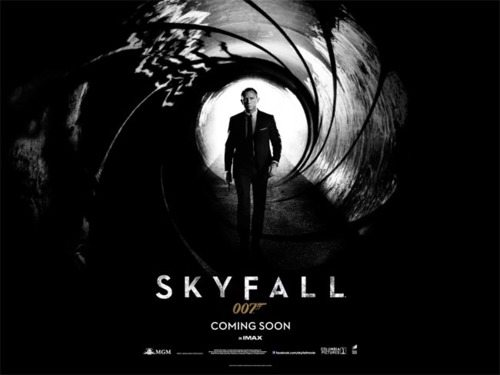 Greetings, Agent. As a duly designated representative of D.O.O.M, it is my duty to inform you of your latest special assignment, Operation: “Tease Me, Baby.” When you’re quite done giggling. This latest operation will be to examine the contents of a video media file simply titled ‘Skyfall’.

Skyfall is a big deal for the James Bond franchise, few movie characters get 23 movies under their belt and this year also marks the 50th Anniversary of Ian Fleming’s creation. The third movie to star Daniel Craig, the latest outing for Bond revolves around MI6 being attacked, Bond’s loyalty to M being challenged over secrets from her past and Bond experiencing combination of lassitude, boredom, depression and difficulty with what he’s chosen to do for a living. Check out the trailer below:

Bond seems to be suffering from PTSD and settles it by going jogging! Maybe. I dunno, the trailer reveals little. The mention of “Skyfall” does elicit a response from a shell-shocked Bond but we shall have to wait to see what that really entails. Maybe he fell in love again, who knows.

For Queen and Country

The attack on MI6 really does take its toll and whatever caused it is tied to M (Dame Judi Dench’s 7th consecutive role in the franchise) and the mysterious Skyfall. I think.

Worst. Tunnel of Love. Ever.

So some part of the film takes place in China! Exotic!

It could be an orphanage and it could be the villain, it’s not like the trailer is giving anything away!

And that’s Skyfall! To be honest, I wouldn’t have guessed at what the plot is by the trailer had I not looked it up. It’s a tough trailer to do this article for but it looks like Bond, smells like Bond and tastes like a martini, shaken not stirred.

Skyfall is set to be released in the UK on 26 October 2012. This article will self-destruct in 5 seconds.