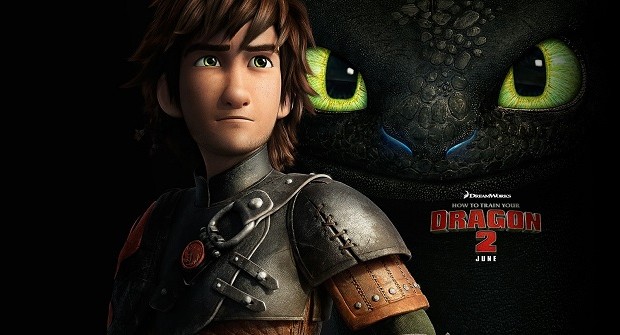 Tease Me, Baby! – How To Train Your Dragon 2

How To Train Your Dragon was a surprise film for me. Looking back, I genuinely don’t know why I had such low expectations going into it but I was definitely won over by a charming and heart-felt film. I didn’t expect a sequel but I guess you can never rule one out these days.

The official full length trailer was released on the 20th of December which is really an awkward time if you want it to be seen by the most amount of eyes possible. I think it snook past most people’s attention during the busy holiday period. I hope to rectify that problem today.

All the original cast returns – and what a cast: Jay Baruchel, Gerard Butler, Craig Ferguson, America Ferrera, Jonah Hill, Christopher Mintz-Plasse, Kristen Wiig – as does the director Dean DeBlois who has also written the screenplay this time around (while having a writing credit on the first film he did not write the screenplay itself).

I like how they’ve aged our protagonist, Hiccup. He has grown by 5 years, which is the amount of time that has gone by in real-life too (give or take). I’m sure the producers hope that growth will also be seen in the audience.

Often the temptation is to keep everything the same from the original film but this opens up a lot of storytelling oportunities and is a much better decision, if you ask me.

The first movie was all about Daddy issues and with no grown-up female present in the film it felt like an overtly masculine movie. I welcome this inclusion of Hiccup’s previously absent Mother for all those reasons and more.

Plus, she’s voiced by Cate Blanchett which, you know, is pretty cool.

The general motive of sequels is to give you the same but more. While the last movie was a big adventure it was relatively self contained on a small island. However, this time the world opens up…

Overall: this looks good! Lots of story to work with, there is a consistency in the look while everything has progressed at the same time. Exactly what you want from something with a “2” on the end of it.

Tags: both are dangerous but dragon con MORE so, dragons, not to be confused with dragon con