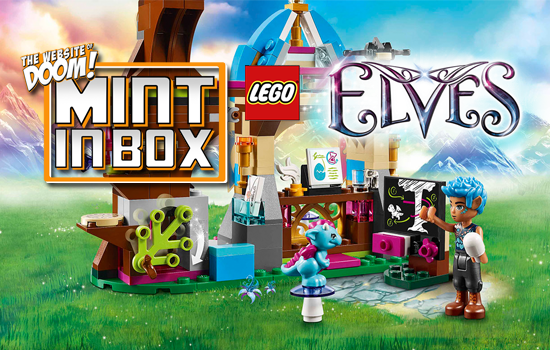 How to Train Your Dragon and WINX Club meets LEGO? All right, let’s see what this is like.

LEGO Elves came about in 2015 as an off-shoot of the LEGO Friends theme and I originally thought it would be a marked improvement; not focusing on jobs in the service industry, veterinary practices or pop stardom. Then I saw Nadia’s Spa Secret and Azari and the Magical Bakery and sighed lamentably.

While much of the line focuses on magic and adventure, it can still be stymied by the trappings of being the ‘girl LEGO’ and that strikes me as wrong. This seems like a pretty cool world with magic and dragons and what seems to be a fish-out-of-water human character but is there even a villain for this line? Some kind of antagonist for these mages and their dragons to battle? There’s one, who only just received her first set, a year into the line (Ragana’s Magic Shadow Castle, which looks pretty awesome). Anyway, today we’ll be looking at the 41173 Elvendale School of Dragons, which contains 230 pieces and sells for an RRP of £17.99. The box is eye-catching and really sells the mystic aesthetic and does a good job of showcasing the features of the set as well as the cross-sell for the LEGO Elves app (which I won’t be looking at like the NEXO Knights one) The box contains two bags of bricks, a sticker sheet, a sheet with perforated banners and a long stick. As usual, we’ll take a look at the figures included first and this time it’s of the mini-doll variety. This is Tidus Stormsurfer, a water elf who is a little bit like Hiccup from HTTYD and is in the process of training Miku, the baby dragon included in this set. He comes with an hourglass and can wield what is blatantly a Jammie Dodger crossbow. I… I don’t… The majority of the build consists of the small hut and tree next to it. Unlike the Lord of The Rings sets, this magical world is alive with colour and the unusual hues and translucent bricks present in this set makes the build rather interesting. The little nooks, crannies and details added in during the build gives the impression of a lived-in world despite being an isolated little island. There’s a removable desk, mail slot, storage box for Jammie Dodgers that can hold precisely TWO delicious biscuits and still be able to close the lid. The long pole is rather malleable and acts a rail that bends around the entire set to create a launcher/swing for Miku, presumably to help the little dragon learn to fly if the included blackboard is any indication. Overall, I think the Elvendale School of Dragons is a cute little set. It’s not as cool looking as the bigger dragon sets or that boat from last year but as an intro to the line, it’s not too shabby. I appreciate the colour scheme, the design aesthetic and the possibility of lore. Thank you to LEGO and Crescendo PR for the opportunity to review this set and I’ll catch you guys next time for another Mint in Box!