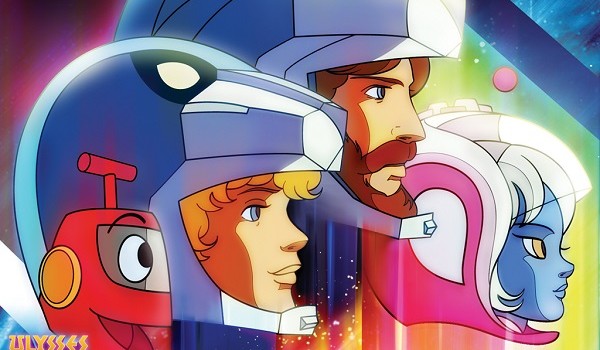 This will be the start of a series of articles I’ll be doing on DOOM based on the TV shows of my youth, titled They Don’t Make Them Like They Used To or TDMTLTUT for short. I’ll be focusing on all the awesome theme tunes that I still sing in the shower to this day.

I have posted a number of these on my own website and will be reposting them here over the coming weeks. Then I’ll continue to post new ones here also. This week, I’m going with the under appreciated classic Ulysses 31.

The show was a French/Japanese cross-over production and is as far-out as you’d imagine one to be. It’s a basic retelling of the Greek myths of Homer’s Odysseus but updated to the 31st century.

Zeus, now a big floating head in space, curses Ulysses and his crew because Ulysses saved everyone from a Cyclops.. or space Cyclops, I don’t know. The crew are kept in the creepiest kind of suspended animation (they hang in mid air, like corpses) until Ulysses and his son Telemachus, a robot, and a young alien girl make the voyage to Hades. Encountering several problems and challenges along the way, of course. It has a weird mix of both ancient Greek style and futuristic technology. For example, the Greek style head pieces above but instead of the traditional leaves it is a metal band with aerials and screws.

There was a little red robot called No-No who ate screws and scrap metals. He also had a handle on his head that he could press to rev himself up… ladies.

Oh and did I mention the ship is essentially a flying eye? This show was all kinds of messed up. It was dark and slow paced which you would think made it unsuitable for kids but it was repeated constantly on TV and I loved it endlessly. If you can buy the DVD box set or legally acquire it from a torrent site, you won’t regret it.

I’ve already got the theme tune stuck in my head just thinking about it. If you think of a cross between Daft Punk and the guy who sang the Pokemon theme tune, you’d be close. Luckily, because the Internet was designed to please my inner child, I don’t have to try and describe it! Have a listen and enjoy humming it for the rest of the day.

This video also contains a quick “previously on” which will give you a good impression of what you’re up against.