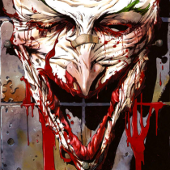 The adventures of Batman take a dark and morbid turn in DC’s namesake Detective Comics. Skinning, maiming, throat ripping, face bashing — who put all this Saw in my Batman comic!?

Naturally, Batman’s no stranger to the dark and twisted, and no stranger to getting dark and twisted completely wrong. For proof look no further than the atrocities committed by lesser Batman villain Black Mask: torturing Stephanie Brown (alias Spoiler/Batgirl) with a power drill, driving Catwoman’s sister into madness by force feeding her pieces of her own husband, self-mutilating and killing wantonly in ways that teach you what the word “wanton” really means.

I used to wonder why Black Mask wasn’t a more popular villain. After all, the idea behind his character is genius — the anti-Batman, the anti-Bruce Wayne, a living example of nurture triumphing over nature. But now it’s no wonder why Jeph Loeb decided to do anti-Batman over again in Hush: too many writers completely failed to see the potential beauty behind Black Mask’s character and ended up just making him yet another psychopath stalking Gotham. But unlike the Joker — whose acts of chaotic, brutal lunacy complement Batman’s own psychoses (see The Killing Joke and Christopher Nolan’s The Dark Knight) — Black Mask’s sociopathy comes off as empty and meaningless…you know, like actual sociopathic behavior! It’s like reading poetry by Charles Manson; meaningless drivel that only leaves you feeling dirty for having read it. No, Batman’s no stranger to dark and twisted.

But…this…this isn’t dark, or twisted. It’s just morose. The point of comparison I can’t help returning to is the Saw films and their imitators: a lot of gore and violence with no emotional investment in any of the events taking place. And like Black Mask, there’s no thematic weight here, no existential conundrum shuddering Batman’s resolve, just…gore. Faces of Death opens as many Batman stories do, Caped Crusader hot in pursuit across the rooftops of Gotham for a recently escaped Joker. Our hero finds the Crown Prince of Crime in an abandoned building along with an unknown villain wearing a mask sewn of human skin. For reasons which will become clear later, a nude Joker promptly rips out the masked man’s throat with his teeth and flees the scene, torching the building behind him. (All-in-all, a typical night for Mistah J.) This leaves Batman to deal with a bloodthirsty GCPD, a vagrant girl hiding beneath the stairs, and the remains of the masked man. But further investigation leads the Dark Knight right into the clutches of…the Dollmaker! Who is the Dollmaker? (Spoilers: a disappointment.)

To be fair, threads of good ideas bare themselves throughout the comic. For instance, the Joker’s morbid mob of “admirers” who ensnare GCPD after news of his “death” hits the street. Seems like a ripe moment for satire, a little jab at readers who obsess over the Joker a bit too much (to the point that killing him off proves nigh impossible), am I right? And what does Daniel do with this? Well, approximately…dick.

If there’s anything that the early days of Image Comics failed to teach us (“us” here being Dan Didio and Jim Lee), it’s that artists don’t make good writers. An artist with a talent for writing occurs fewer times than a blue moon on leap year and Tony S. Daniel is no such exception. He’s a talented artist, good with atmosphere and action — his Gotham is a foggy, London-esque monstrosity of amorphous Gothic spires, his Dark Knight a powerhouse of acrobatic muscle — but his plotting trudges along aimlessly without focus. The first volume of Scott Snyder’s Batman leaves the reader with many unanswered questions but The Court of Owls feels like a complete arc, each issue building on the foundation of the preceding, leading you straight into a climactic seventh issue. Faces of Death sets up several arcs but fails to complete even one of them within the space of six issues. Of course, each issue is self-contained in their episodic way, decompressed storytelling being the norm here, but the individual episodes fail to build to a satisfying finale. The front half of the book follows Batman’s hunt for the Joker and subsequent confrontation with the Dollmaker; we’re clumsily led into the next storyline concerning the Penguin, the opening of the Iceberg Casino, and the capers therein. But the two stories barely relate to one another, don’t complement each other, and barely share anything in the way of theme or overall ideas beyond “Batman walks in on a villain’s shenanigans and fucks their shit up.” And of course the villains get away in both instances (sorry for the spoilers but, frankly, any expectations get shot in the foot two pages into this book) because God knows the Dollmaker was just so compelling of a villain we just have to see him again. (More spoilers: the Dollmaker and his crew are just a pastiche of the Texas Chainsaw Massacre family, only all of them are Leatherface with dialogue ghostwritten by Rob Zombie.)

Oh, and Batman has a new love interest in this book. Is she worth talking about? Fuck, no.

So what is Detective Comics, in the end? The episodic adventures of Batman confined to manageable three issue arcs? A contrast to Snyder’s decompressed, sprawling Batman tale? Well, no. Daniel weaves tendrils through each story projecting a bigger picture, foreshadowings of an epic confrontation between Batman, Joker, and Dollmaker. But these tendrils barely register and what hints get dropped give only the faintest glimpses at what that bigger picture is supposed to be. Like trying to put together a jigsaw puzzle with Mr. Magoo vision: the images so obscure they’re indecipherable, so all you’re left with are the pieces someone put together for you.

And, of course, I won’t be the first to point out the ultimate irony of this book, but, regardless, it can’t be said enough times: of all the Batman books currently available (last I checked, we’re up to five with the relaunch of Batman, Inc.), Detective Comics features the least detective work of any of them. Mostly, it features Batman beating up guys, escaping from guys, beating up the guys he was escaping from, and a backup story about Dr. Hugo Strange’s son. (Do I even need to tell you that the backup story has no bearing on the plot of this volume?)

Sunshine and roses don’t follow David Finch’s Batman: The Dark Knight’s reputation, so I hesitate to call this the weakest of the New 52’s Batman-centric titles, but it certainly vies for the position. Yet at the same time, I hesitate to use the word “bad.” This book isn’t bad; it just fails to be good. It’s a couple of middling Batman tales that fill time between now and the next Batman trade. Something that is, at this point, unacceptable of any Batman title.