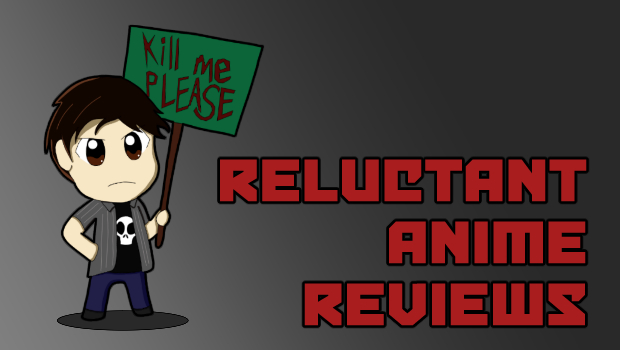 I want you to think of the most insane story you’ve ever heard. Now, I want to you to imagine it animated without any irony, and paced like a runaway bullet train. I want you to imagine a story that manages to be touching and emotional, while still being unimaginably goofy and dumb. Now, take that story you’ve imagined, and forget it; because Kill La Kill exists, and nothing can top it at what it does.

Ryuko Matoi is a high school student wandering around Japan, looking for her father’s murderer. Eventually, her search leads her to Honnouji Academy, a strange school ruled by a ruthless student council president named Satsuki Kiryuin. When Ryuko transfers to the school, she ends up butting heads with Satsuki, and the student council president implies she knows who killed Ryuko’s dad. Ryuko’s temper gets the best of her, and she goes after Satsuki, but is quickly dispatched by the boxing club president. It seems that at Honnouji Academy, students higher on the social ladder are granted special “Goku Uniforms” –clothing infused with strange “Life Fibers,” that enhance the wearer’s physical capabilities. Ryuko also gets forcibly befriended by Mako Mankanshoku: the best character in the show.

Ryuko retreats to her family’s ruined manor, and stumbles into a secret lab in the basement. There, she finds a sailor uniform called a “Kamui,” that is awoken by her blood.  She names this sentient uniform Senketsu, and discovers that he gives her powers equal to or greater than the students wearing Goku Uniforms.

Soon after, Ryuko fights a proverbial gauntlet to reach Satsuki Kiryuin, destroying anyone who gets in her way. I can’t even use the word “Hijinks” to describe what ensues. Kill La Kill knows it is dumb. It knows that its premise and characters are stupidly wacky. Kill La Kill realizes this, and embraces it. More importantly, though, it doesn’t fall into doing things ironically. It tackles its plot with the same level of passion and seriousness that a director of an Oscar winning picture would. This infuses the show with a sincerity and heart that is hard to describe in words. Kill La Kill knows exactly what it wants to do, and works to accomplish it in the best way it can. Friendship is serious business, yo!

At its heart, Kill La Kill is a character story. Boiled down, the show is all about the bonds people make in life. It extols the virtues of acceptance and passion while telling this preposterous story. It’s all about friendship and trusting others. Every character serves a purpose in Kill La Kill, and everyone is given enough screen time to ensure the audience can develop an opinion of them.

There is a lot of partial nudity in Kill La Kill. A whole lot. However, instead of reacting to the copious amounts of fanservice with my usual revulsion and hatred, I was strangely OK with it. After a lot of thinking, I finally realized why. It’s because the nudity in Kill La Kill is rarely sexualized. All the bare skin and nekkidness doesn’t feel creepy or forced, save for a few exceptions (which are specifically made to make the viewer uncomfortable, or to depict the unease of a character.) The most evil Vulcan Nerve Pinch ever

The fact that the nudity in Kill la Kill is pretty equally divided between genders helps as well. Sure, Ryuko’s battle outfit is one of the most outrageously skimpy things I’ve ever seen, and the transformation is gratuitous, but the male character who constantly strips down in conversation balances it out, in my opinion. One has boobs covered by suspenders, while the other has nipples that glow with a holy nude light. Both are played for laughs- the viewer is supposed to embrace the overblown silliness, and take it as the joke it is. In the last third of the show, a solid 90% of the cast is naked save for a few belts and ammo pouches. Men, women, children, it doesn’t matter.  And it doesn’t seem strange or out of place. It makes sense considering where the plot goes, and the show doesn’t dwell on it. The characters all accept the nudity and skimpiness after about the fourth episode and it just becomes a matter of fact. It says a lot that the series can include a giant, naked, exhausted cuddle pile after the final battle, and have it not only be non-sexual, but a touching visual representation of the bonds the characters made. This is about as sexy as a T-Shirt and baggy jeans by the end of the series.

It seems like Kill La Kill does all this for the same reason it has ridiculous action and stylized animation: because it’s fun and looks cool. It injects this weird innocence into the show. While I personally don’t like the designs for Ryuko and Satsuki’s battle attire, I can forgive them. The story always comes first, so it’s fine. Also, look at this giant man.

Kill La Kill is filled to the brim with some of the greatest action ever animated, considering the budget. It’s over-the-top in the best way, and is exactly what you’d expect from the guys behind Gurren Lagann. It’s like Power Rangers on crack.

I don’t know what to say. It’s good. KILL LA KILL IS GOOD! It’s brain-candy in every sense of the word. Even if you don’t like anime, Kill La Kill is so unique and well done; it’s hard to get this experience anywhere else.  Just watch it. Kill La Kill has everything. Kill La Kill.

Sharp-O here, throwing in my two pence about this series- and boy oh boy what can I say that Isaac hasn’t already said? Kill La Kill is a balls-to-the-wall action adventure with comedy, heart and the most cringe-worthy premise you’d expect from an anime. Girls with super-powered school uniforms? What is this, Sailor Moon? A LITTLE BIT! But it takes what could be a very banal premise and injects it with Gurren Lagann levels of silliness and hyperactive action. Every character is amazing, and that’s not hyperbole: EVERY character is given a moment to shine and they all have something about them that you will like. The music is great too, especially the “hero song” that plays when shit gets hype, though they use the two intro songs to great effect within the show too. I love this damn show and I’m kinda sad that whatever anime I go for next will probably be lacklustre in comparison.

NEXT TIME: THE CREEPIEST SHOW EVER. I’M NOT EVEN JOKING. THIS ONE WILL KILL ME. I want to punch the person who made this in the genitals. With a gun.