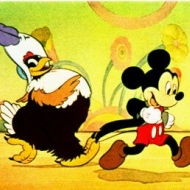 A brief rest period from ranting to reminisce about the good ol’ days. Or, my top 5 favourite cartoons from the golden age.

Here it is, my first “Top Whatever” article for the column. For this one I decided to hop in the Way Back Machine with Peabody and Sherman to take a look back at the Golden Age of Animation. The Golden Age lasted from the 1930s to the early 1960s. This is when all the principles of animation were forged. This is the era of such greats as Chuck Jones, Bob Clampett, Tex Avery, Walt Disney, Ub Iwerks, Max Fleischer, Walter Lantz, and many, many more. This era introduced us to all the cartoon icons that have helped shape pop culture and continue to endear today. Bugs Bunny, Mickey Mouse, Daffy Duck, Popeye, Donald Duck, Betty Boop, Porky Pig, Goofy, Woody Woodpecker, Droopy, Tom and Jerry, Mighty Mouse, Bosko the African American Child…okay not so much Bosko, but you get the idea.

These characters have starred in the greatest and funniest cartoons ever made, and here’s a top five list of my personal favorites. I tried to stay varied and chose from multiple studios, I didn’t want this to be too Warner Bros. heavy. Let’s get it going…

5. Mickey’s Fire Brigade (1935) dir. by Ben Sharpsteen
One of the early Mickey, Donald, and Goofy team-up cartoons. These three usually have great chemistry together and it shows here. This one features the trio trying to extinguish a burning building with hilarious results. A lot works in this cartoon. Great colors, funny Donald butt gags, and an overall fun story.

4. You’re a Sap, Mr. Jap (1942) dir. by Dan Gordon
Politically incorrect right from the title, this one is so wrong, but oh so hilarious. World War II brought about some funny, albeit slightly racist, cartoons and had our cartoon stars fighting the Nazi menace. Bugs Bunny, Daffy Duck, Donald Duck, and Popeye all took their jabs at the Nazis, but this one stands out as my favorite. It features Popeye going up against some, forgive the terminology, shifty Japanese sailors. When they push the one-eyed sailor to his limits, Popeye goes nuts on them, singlehandedly tearing through their entire fleet. Great animation and gags make this a much watch…if you’re not easily offended that is.

3. Russian Rhapsody (1944) dir. by Bob Clampett
Never has Hitler been so funny. Another gem from WWII, this one by Bob Clampett features a group of gremlins sabotaging Hitler’s fighter plane. This has some amazing animation that will have you laughing your ass off. Mel Blanc does a fantastic angry and crazy Adolf, and if you’re not laughing in the first minute and a half, you have no soul. You can view Russian Rhapsody here.

2. Deputy Droopy (1955) dir. by Tex Avery and Michael Lah
This one was from the tail end of the Golden era, but it’s still great. It may not be the best Droopy cartoon, but it’s my favorite. The entire premise is lawman Droopy keeping a couple of robbers from stealing a safe by making them make enough noise to wake the sheriff. The ensuing madness is comic gold, with Tex Avery’s signature style in full effect. The cartoon just get’s increasingly crazy as it goes on. The timing and animation are all perfect and the twist ending wraps it up nicely.

1. A Tale of Two Kitties (1942) dir. by Bob Clampett
Hands down, my favorite of all the Looney Tunes cartoons. This cartoon was the debut of Tweety Bird and featured him fending off cat-analogues of Bud Abbott and Lou Costello. This cartoon is just wonderful. Everything about this cartoon is spectacular, especially Tweety, who’s portrayed here as sadistic and murderous, constantly toying with these two hungry cats, never giving them an edge, and betting them back even as they constantly up their game. This cartoon never fails to entertain me. Clampett has directed some of the greatest and funniest cartoons of all time, and this is one of his masterpieces.

So there you have it. From Mickey, Donald, and Goofy fighting fires to Popeye fighting those damn dirty Japanazis, the Golden Age of Animation was a time of bold ideas and masterful animation. A more innocent time where a rabbit could dress in drag to seduce a functionally retarded hunter and no one would bat an eyebrow. Ahh, the good old days.

So there you have it. Every time I hear some reviewer gush praise over a new Dreamworks animated flick I have to bury the rage deeper and deeper, less I unleash it on my poor unsuspecting Toshiba. Their stories are boring, their characters are bland, their art style is atrocious, and their animation is the absolute pinnacle of mediocrity. Now, I’m not telling all of you to stop watching their movies. All I’m saying is if you do, you’re just encouraging their crap and I hate you forever.