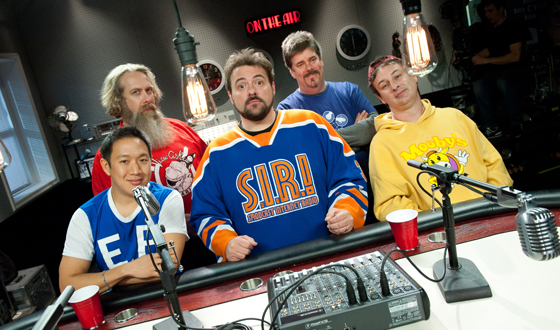 So I’ve been putting off seeing Comic Book Men, the latest in Kevin Smith’s multimedia output, for a while now for a myriad of reasons. First being the promo that I saw that seemed to paint comic stores in a stereotypical bad light, the reviews that seemed to back up this notion and my general disinterest in Smith’s work that’s being going on for a few years. I fell out of love with him a while back but I figured I’d give this new venture a shot and at the very least get an article out of it.

Comic Book Men is a six part series that centres around Jay and Silent Bob’s Secret Stash, Smith’s own comic book store in Red Bank, New Jersey. While Smith does own the joint, it’s operated and staffed by some of his closest friends. Walt Flannigan, manager of the store and collaborator on Kev’s more recent Batman titles. Two other members of staff, Ming and Mike and Bryan Johnson, who appears to be the store’s resident hobo. I went into the pilot expecting not to like it but to my surprise, it’s quite watchable. It’s an ‘unscripted’ reality show that feels very scripted at times. The show is split into varying segments that include; People coming in to sell stuff, a podcast recording (which is available as a companion to the show) and a form of challenge ala The Apprentice. They’re mixed around a bit but I’ll talk about each section individually. of what that scenario is like and B) very awkwardly acted. I say ‘acted’ because it feels like these people were chosen specifically to come into the store and asked to do multiple takes of their lines. There’s also the fact that almost all of these people bring in rare collectibles that are actually worth money. During my brief stint working in a comic shop, I never had someone walk in with a Bob Kane original sketch. We had a lot of folks trying to sell Zero-issues and supposedly “valuable” Image comics because they had foil covers or trading cards attached but never something that was worth money. The closest thing to the reality of comic book stores in this segment was a douchebag in sunglasses carrying a handcuffed bag (See? Douchebag.) full of Dawn of The Dead memorabilia that, while pretty awesome, wasn’t worth nearly the price he was quoting. Once the guys brought in their special guest, popculturalist Robert Bruce, the guy was soon heading out the door when Rob pointed out how much his collection was worth. Still collectible but nowhere near the $1,000 dollars he wanted. It’s baffling and extremely watchable to see a succession of people with rare collectibles walk in but hopefully we’ll see the real nutters as the show goes on.

The Challenge section revolves around the guys getting rid of some dead stock that’s cluttering the place up, so they take it all down to the Collingswood flea market, splitting it into thirds and seeing which guy makes the most money out of Ming, Mike and Bryan. Various dirty tactics are employed, Bryan gets accosted for being a dick and it’s a fun segment for what it’s worth.

The third segment is the podcast which cuts in during the valuation segments, to allow for Walter and the others to discuss what happened with Kevin Smith. It allows them to freewheel and tell anecdotes about their lives and what some of the merch shown in the episode means to them. Some of the stories have been heard before if you’re a fan of the SModcast but it’s the best part of the show as a whole.

As the title suggests, this show is a complete sausage fest but AMC did want a female within the cast at one point. Zoë A. Gulliksen was cast and even filmed the pilot but was tragically cut from the show entirely. There’s no trace of her in there. Kevin Smith had described her as “perfect” for the show but whatever was going on behind the scenes meant she could not appear which is a damn shame. She might have been able to bring something to the show that the core cast could not.

For a pilot, the show is good but not great and, in my personal opinion, not nearly as bad as some reviews are making out. I can see their point but upon watching it myself, I found some of the stories told to be funny, the dynamic of the group was solid and I see potential in this show but I do want to see something closer to actual comic book store life. Where are the long-boxes full of waterlogged dreck?

You can see Comic Book Men on AMC on Sundays.