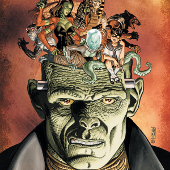 Reviews of FRANKENSTEIN AGENT OF S.H.A.D.E. VOL. 1: WAR OF THE MONSTERS and BATMAN: THE BLACK GLOVE DELUXE EDITION

Frankenstein Agent of S.H.A.D.E. Vol. 1: War of the Monsters Here’s an odd yet brilliant mash-up of characters and ideas, so, of course, it should come as no surprise that most of it originates from the mind of Grant Morrison. Specifically, this version of Frankenstein and the Super Human Advanced Defense Executive (S.H.A.D.E., a…shady government organization — see what they did there?) germinated from Morrison’s Seven Soldiers of Victory, a miniseries itself composed of several smaller miniseries meant to reinvigorate several  of the DC universe’s minor characters, with Frankenstein as one of the titular seven soldiers. A version of Frankenstein’s monster has existed in the DC universe since the ‘40s (oddly enough, debuting as a Batman nemesis) but this incarnation takes inspiration from Doc Frankenstein and Hellboy, homages to classic pulp heroes like Doc Savage with a gothic twist. Jeff Lemire’s Frankenstein continues in that vein, battling forces from beyond the veil with Pulp action aplomb while maintaining a healthy sense of poetic self-loathing that comes natural to an electrically animated monstrosity forged of multitude corpses.

But whereas Morrison’s S.H.A.D.E. was an out-and-out nefarious organization (a product of the Patriot Act no less) that had to blackmail Frankie into service and got up to even stupider villainy in the Infinite Crisis tie-in Battle For Bludhaven, Jeff Lemire reinvents S.H.A.D.E. into a B.P.R.D.-esque covert supernatural investigations group. Following suit, S.H.A.D.E.’s director, Father Time, has forsaken his villainous roots as well, embodied, strangely enough, in his transmogrification into an elementary school-aged Japanese schoolgirl…wearing a domino mask…because domino masks are cool.

Along for the ride, we also have former Atom, Dr. Ray Palmer, complete with shrinking belt though sans costume (Ryan Choi remains the current Atom, it seems), supplying S.H.A.D.E. with advanced technology while acting as liaison between S.H.A.D.E. and the United Nations. The book opens with a scene all too familiar to horror movie fans: the opening kill. Yes, sadly this grandfather and grandson enjoying their day fishing on the lake lack the extrasensory perception to know they’re the opening shot of a creature feature. Sure enough, wretched lake monsters devour the pair but not before the grandfather lets on that he knows more about these nightmares than your average grandpa. Enter Frankenstein.

Foregoing a scheduled vacation, Frankie pays a visit to S.H.A.D.E. at Father Time’s request where Father recruits Frank into action against this sudden monster outbreak. Frankenstein refuses at first but upon learning his estranged wife, the Bride of Frankenstein, S.H.A.D.E.’s premier super-agent (and, yes, she’s given no other name beyond “Bride” despite making it abundantly clear the two are well divorced), is M.I.A. and most probably in danger, Frank can’t help but accept. Enter the Creature Commandos, S.H.A.D.E.’s team of enhanced super-agents, each made to resemble a classic Universal Movie Monster: Nina the Mermaid, a Creature from the Black Lagoon homage; Velcoro the Vampire, more accurately a Langstrom serum-induced man-bat; Griffith the Werewolf; and Khalis the Mummy. With Frankenstein at the lead, they enter the now quarantined town and give battle. But yet more unspeakable horror await them within the lake itself.

Alberto Ponticelli’s sketchy, exaggerated penciling suits these adventures well, conveying frenetic skirmishes with aplomb and ludicrous landscapes and technologies with equal virtue. The Ant Farm, S.H.A.D.E. HQ, looks suitably enormous yet claustrophobic as pylons stretch endlessly upward yet Brazil-style ducts, wires, and machinery clutter the ground — indeed, the specter of technology looms over the characters, an entity unto itself. However, juxtaposed to J.G. Jones’ magnificent cover art, personally, I’m left fantasizing what could have been had he penciled the entire book. But that’s unfair to Ponticelli who really does an outstanding job here and more my personal preference when it comes to comic book artwork.

As much as I enjoy Frankenstein Agent of S.H.A.D.E.’s classic Pulpiness, a few moments try just a little too hard to be Pulp. “What shall we call our egg-shaped interdimensional shuttle?” “How about ‘The Egg’?” “Perfect!” “What shall we call this box-shaped device that holds a ridiculous number of weapons?” “How about ‘The Toybox’?” “Brilliant!” Anything and everything has its appropriately twee codename — the Ant Farm, the Zoo, I’m sure even the lavatories have appropriately pointless nicknames. Consequently, the book has about as much character development one would expect from a Pulp adventure. Frankenstein, ever at odds with his Bride (sorry, ex-Bride), shows some rounding around the edges as we learn some of his backstory and see his interactions with old friends like Father Time and the Bride, but the book becomes so wrapped up with ludicrous plots that not enough character shines through after six issues. Frankenstein’s Bride provides the requisite mouthy badass but Frankie’s Creature Commandos suffer the most: Nina the Mermaid gets her own Dr. Frankenstein-style guilt trip following the creation of her first batch of botched Creature Commandos, but Velcoro, Griffith, and Khalis remain one-dimensional even after six issues. Velcoro and Griffith exchange verbal silos but their quips lack originality. (Their one-liners must have come from the three-for-one bin.)

A look at the latest collections and omnibus releases Yet more goodness from the weird and wild brain of Grant Morrison who never fails to bring something strange and new to every title he works on, Batman included.

But before we get into the meat of things, it needs noting that this volume’s title is something of a misnomer as it contains more than just Batman’s confrontations with the Black Glove. Indeed, the working title seemed to be “Batman and Son vs. the Black Glove”, a more encompassing title as the first third has little to do with the Black Glove storyline save some foreshadowing. I say “something of a misnomer” because Morrison’s run here can be characterized as part of the overall Black Glove cycle (although that would also include Batman R.I.P. and Batman & Robin if we were to nitpick). Regardless, this collection contains three distinct storylines previously collected in the Batman and Son and Batman: The Black Glove trades and contains everything the entirety of Morrison’s run on Batman leading up to Batman R.I.P.

Unlike a lot of modern comic book writers, Grant Morrison embraces the lavishly ludicrous elements of superheroes, taking all aspects of a hero’s storied career as canon and shedding new light on forgotten chapters of a character’s history. Here, Batman’s particularly zany adventures from the Silver Age manifest as the garbled hallucinations induced by too much Joker gas and fear toxin. Alternate versions of Batman manifest as the Three Ghosts of Batman, the Batmen of Many Nations, and even Bat-Mite has a cameo. Impressively, Morrison introduces these elements without losing the heart of Batman’s character and without allowing the ludicrous to override basic emotional investment. For example, there’s a nice through line from story to story about Alfred encouraging and helping Bruce to maintain his playboy image, not so much to hide the fact that Wayne is Batman, but to remind Bruce to lighten up every now and again for his sanity’s sake. He’s one of the few writers now that remember Batman’s human side while too many others, taking all the wrong influences from Frank Miller, turn him into a paranoid asshole.

Andy Kubert, J.H. Williams III, and Tony S. Daniel provide pencils for each story arc. All provide excellent artwork though Williams stands above the others, providing his ever amazing design work for the Club of Heroes segment. Kubert and Daniel provide your typical post-’90s artwork: highly detailed and sketchy with lots of hatching. Not a bad style, especially in the more action oriented sequences, but, against Williams, falls somewhere short. The more painterly touches in Williams’ art complement the noirish mysteries behind Morrison’s plotting while Kubert and Daniel’s art feels more at home in your typical action comic, though both successfully deliver when it comes to grandiose reveals and high-flying stunts. This is an excellent jumping-on point for recent events in the Batman mythos as well as an essential lead-in to Morrison’s Batman & Robin and Batman Incorporated, along with Batman R.I.P. Plot arcs from The Black Glove carry over into those books, so jumping in without this volume for backstory means jumping into a story half finished with no context.