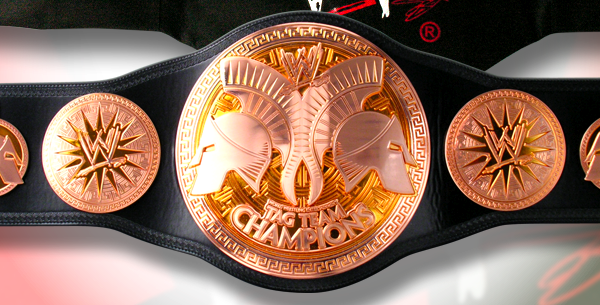 If you think about the WWE tag division of 3 or 4 years ago it would probably be pretty damn difficult for you to name three teams from that period. There were a lot of randomly generated teams put together out of ease rather than purpose. However, I’m going to make the argument that they’ve really turned things around and the division is now the strongest it has been since the Attitude days.

I’ll make my case by listing all legitimate teams currently getting air-time on RAW and Smackdown and there is no better place to start than the champions. The winners of the best match at the recent Battleground PPV surprisingly stayed together as a team and won the titles a week later. I was only surprised that they stayed together as Goldust was essentially retired as a wrestler and working backstage until about a month ago. I didn’t think he’d stay active after the PPV but I’m so glad he did. He looks in great shape and is the epitome of a veteran with all the skills that comes with such experience. Teaming him with the young and talented Cody is a great combination and I hope they stick around for the foreseeable future. The ex-champions had a respectable reign (and rollins… ahem) and lost in a fashion that still makes them a threat. I like the two as a coupling. Reigns is big and strong while Rollins is more fast and technical. Opposites attract in the tag division as far as I’m concerned. Their only downside is that they get used so much as a trio in different stories that it effects their tag standings. They’re supposed to be the current #1 Contenders but they kind of got forgotten about during the Rhodes return. They’ve been around the WWE for a number of years now but I get a sneaky feeling they’re still seen as green by the guys in the back and have never been trusted with a true push. Their lack of mic skills might be what’s holding them back. Everybody knows how much I love this team. They’re the Dolph Zigglers of the tag division. Completely under-appreciated despite their endless potential with a growing (and vocal) fan base. Something is holding them back with those in influence backstage and we may never know what it is, but they deserve a push and I worry that it may never come. I’ll keep barking along with Titus O’Neill regardless. In another time period, another generation, this duo would be huge. Admittedly, they’re huge in size now, but not on the show. Two guys as imposing as Brodus Clay and Tensai/Albert/Sweet T should be steam-rolling the competition. Maybe they’re wasted as a “face” team. You couldn’t keep the dancing gimmick if you changed them to heels though. So maybe they’re left in limbo until someone figures out what to do with them. I feel like it would be a waste to leave them as they are now. With thanks to Zeb Colter on the mic and some more than impressive ring work from Antonio Cesaro, The Real Americans are well on their way to becoming one of the great tag teams of our time. Sure, the xenophobia angle and the questionable fan reactions are reasons to give pause, but it’s wrestling, redneck-theatre was always a little unnerving to modern thinking. I expect big things from these guys in the future. These guys were the tag team champions in NXT before coming to the main WWE roster. They are massive men, dwarfing a lot of their competition in size. They have a strong gimmick and a confident mouth piece in Bray Wyatt but something is just not clicking with the fans quite yet. One good feud could turn all that around, though, so don’t write this faction off quite yet. Awwww jeez… I like Primo and Epico. I think they got a rough deal when they were taken away for redevelopment. I think they got an even rougher deal when they were brought back with these new identities. But they have the in-ring skill that I hope will help them rise above it all and I have to admit, this bull they have with them knows how to move so who knows? Maybe things will turn out OK. … alright, maybe it’s not all so great.

Do you think I’m leaving out any significant team? Shout at me in the comments below.