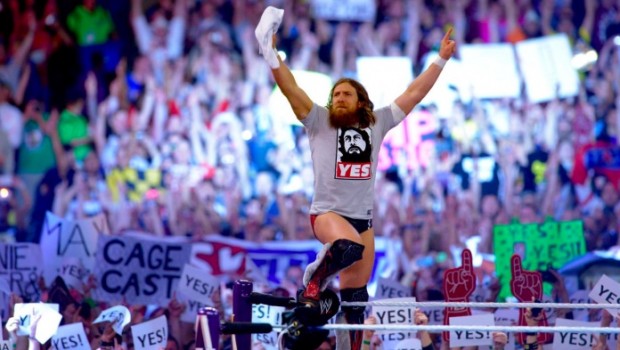 Last night saw the moment we’ve been dreading for at least a year now. Daniel Bryan officially retired from professional wrestling. If you missed it, here is a small snippet of his beautiful goodbye speech.

I encourage you to seek out the full unedited moment. Very rarely does a wrestler talk with such honesty and vulnerability in the ring. As you can imagine, we’re all pretty devastated around her in DOOM Towers. D-Bry was a hero to many of us. He was an underdog for so many reasons in WWE and he became both the representation of the crowd’s frustrations and desires but also a champion that people could identify with. His career has too many highlights to list but I’m going to go over a couple key moments outside of his matches that I won’t soon forget. The following are some of the many reasons I’m grateful for Daniel Bryan.

This is when the Yes Movement officially started. This is when crowds really started to derail most of Vince McMahon’s plans. I encourage you to watch the whole episode because it’s just one whole show of an audience dragging RAW to a halt. Nobody could deal with them. The night before, Daniel Bryan lost the title in an under a minute. He didn’t even have a match or appearance on this RAW. That sh** just wasn’t going to fly. In a dark match after RAW’s airing Daniel Bryan got a chance to address the rabid crowd.

He could barely get a t-shirt in the WWE shop at this point. It’s amazing the turn around he had.

It would still be a while before the company would trust him with a big singles push and so they landed him in a gimmick that should never, ever have worked but somehow it was the best thing on their TV for nearly a year. The New Day of their time, Team Hell No.

On paper, none of that should have worked. But somehow it really, really did.

We all know of the tragic story surrounding Connor The Crusher but let’s not forget where it all began, and his first meeting with his hero Daniel Bryan.

Throughout his tenure in WWE, Daniel was the people’s choice. Time and time again he was being overlooked by Vince’s favourites but the crowds consistently chanted for D-Bry. It many ways, this overwhelming support was to the detriment of Bryan’s career. Vince doesn’t like it when wrestlers get over on their own, he wants to be responsible for “making” them and can get petty about it (see Zack Ryder’s career). This following segment was set up for a Cena/Orton match. But who did the crowd want?

There was a tweet last night that I feel sums a lot of my feelings up today.

If you’re a wrestler & you don’t have the passion that @WWEDanielBryan has, hang up the boots & do something else #ThankYouDanielBryan

He was one of the greats. Let’s watch him take his victory lap…