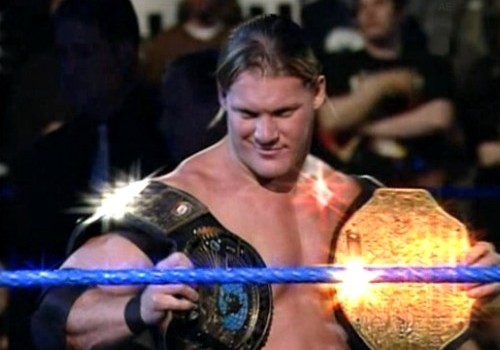 Gather round children as I tell you a tale. The tale of a young lion, smaller than the other lions, but just as loud and just as skilled as the others. There was a competition for the largest prize in all the land and nobody thought this little lion could compete with the other big muscly males. It was that lack of confidence in the small lion from everyone else that made it all possible. This is the story of Chris Jericho and the Undisputed Championship. HHH has been trying to sell this Sundays title unification match between Randy Orton and John Cena as historic. Sadly, it’s not nearly as historic as the first time it happened back in 2001. WWE had recently bought WCW and therefore had control and use of their title. Soon, it became obvious to unite the two championships and they did so with a tournament at Vengeance in December 2001.

The tournament was simple. The two current champions The Rock (WWE Championship) and Steve Austin (World Championship) would face their challengers, Chris Jericho and Kurt Angle respectively. The winners from both matches would then instantly face each-other for the deciding bout.

That’s how you book a Pay-Per-View, folks.

Steve Austin overcame Kurt Angle in the first match. Then came Jericho versus The Rock.

Then, immediately after, the interference-filled match between Austin and Jericho.

Yeah, if you think that all of HHH’s interference in matches is infuriating right now you should have been around for Vince McMahon inserting himself in everything.

This was a real surprise result that nobody saw coming at the time but it was a legitimate title reign. Chris Jericho was a previous champion in both WWE and WCW so he had the experience and Jericho would hold the title for two defences against both Rocky and Austin but would eventually lose to HHH at Wrestlemania 18.

I bring this to your attention not necessarily as a preview of Sunday night’s action but as a note that what has happened in the past sometimes can inform us on the quality (or lack thereof) of today. Lets not forget about it.