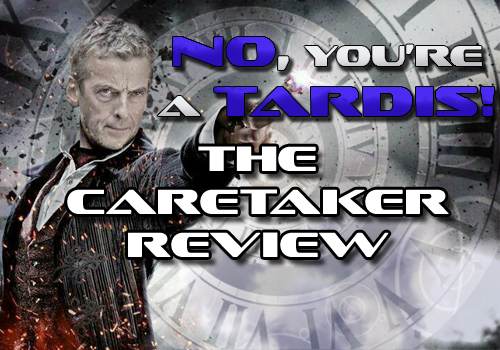 The Caretaker marks a special occasion for me. This episode marked the start of The Clara Backdown. I am officially tired of Clara as a character and the show focusing on here, especially since her role as “The Impossible Girl” is now pointless to the plot. The one good thing is that she’s a gateway for Danny to become a companion (however short-lived that may be).

This episode has a promising premise. Clara is run ragged by her double life until her two worlds collide, hi-jinks ensue. There’s some really interesting scenes and some good performances but I can’t say this is a good episode as a whole, mainly because of the focus on Clara again. The Doctor infiltrates Coal Hill school as a caretaker, hoping to flush out a Skovox Blitzer. This diminutive destroyer of planets is a weird war machine that seems out of place in this universe, especially given it’s similarity to alien races in the Mass Effect series. It’s a simple plot device that gets no development outside of the basic schtick they use for Daleks.

Capaldi is on top form as usual; sassing Clara, Danny, teachers and pupils alike. His dismissive attitude towards Danny’s role as maths teacher could possibly be a call-back to his time as the Fifth Doctor and the Brigadier (who became a maths teacher after retiring from UNIT). His hostility towards Danny as a soldier is one of the highlights of the episode and is the angriest/most offensive we’ve seen the Doctor in a long time.

Danny Pink gets lots of character development this episode! He continues to be a really likeable guy and even shows how he acts in his relationship with Clara (which some have described as abusive because of this episode. Those people are retarded) and even has a big damn hero moment with a sick front flip for style. He takes some abuse from the Doctor but responds in kind. He’s not going to let the Doctor’s attitude slide and that’s refreshing. It’s very Donna Noble and she was the best companion, hands down.

The Promised Land makes a return after a three episode absence but we’re dealing with someone other than Missy, who is “busy”. This suit (who is apparently called Seb) is interviewing the police officer who fell victim to the Blitzer early on, and refers to the realm they’re in as The Nethersphere (his favourite name for the place). Still not sure of the rhyme or reason of these sequences but hopefully we’ll find that out at the end of the season.

Half way through Season 8 and the only outstanding episode in this reviewer’s opinion is Listen. That’s poor form, Who. Poor form. This show needs to up it’s game, especially if it wants to keep getting reviewed. I dropped Miracle Day, I’ll drop Who if it turns to shit and I’ll turn my full attention to Agents of SHIELD and The Flash! Come back next week for the Alien homaging – Kill the Moon (That’s a pretty good title…)