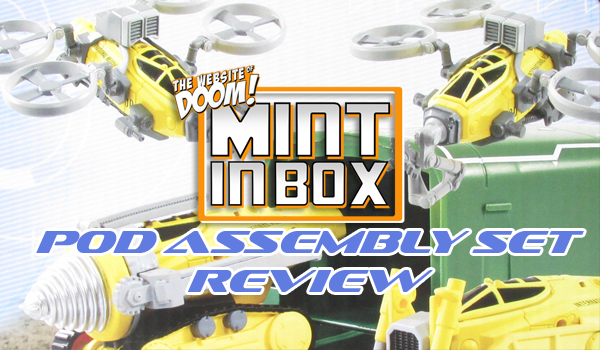 With the second season of Thunderbirds Are Go finally hitting our screens, Mint in Box is heading off to Tracy Island once more to review the Pod Assembly Set from Vivid Imaginations! I was reluctant to review this set to start off with because I was already biased against it due to being, on the surface, a less interesting version of the Pod Mech Set by Takara Tomy, a similar set designed to work with Supersize Thunderbird 2 but having gotten to play around with it, it’s a completely different beast.

Here’s a demo of the construction aspect and sound play patterns:

So, first thing I have to mention is that this doesn’t come with an extra pod for the Supersize Thunderbird 2 but I can understand that budgetary restrictions would put a stop to that after producing brand new moulds for everything so I’m not holding it against the set. The other is how chunky and robust this set is. It’s definitely designed for small hands and rugged play. Sadly, that also means there are a bunch of other restrictions. The treads don’t roll, the safe-for-kids stunted drill and helipod blades doesn’t rotate, the repair arm and dozer blade are static moulded pieces. It’s designed for a very young children and that’s fine because each vehicle does feel solid once constructed. Vigorous shaking didn’t see parts fly everywhere and they can even survive a drop test. Being a kit of assembly parts, I also had to see how it held up in the customising aspect and it does pretty well! Sure, some parts are in compatible with most of the ports but you can do a fair bit of Pod building for yourself. I imagine there’ll be a follow-up set with parts for the other Pod Vehicles.