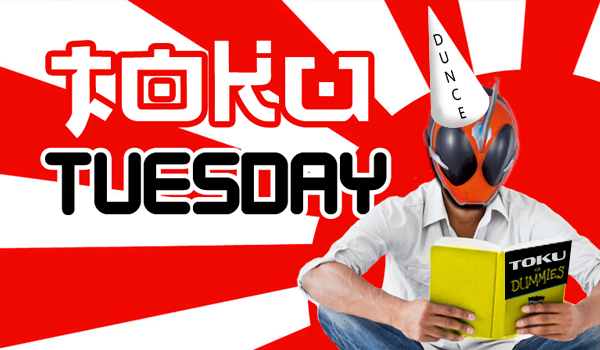 It occurred to me a few weeks ago that talking tokusatsu is all well and good but what would be the best places to start for the uninitiated? Granted, I’m sure everyone has seen a Godzilla movie but the likes of Super Sentai, Kamen Rider, Garo and Ultraman are completely different beasts. Except maybe Ultraman… That’s pretty close to Godzilla.

So what kind of toku is suitable for newbies? Naturally, it depends on individual taste and thanks to nearly all of them being around for around 50 years, most franchises have more than one series that should appeal to you but for the sake of an article, here are my personal choices on the easiest toku to get into for noobs.

Kicking off with one of my top five Kamen Rider series; Kamen Rider Fourze. If you remember the article I previously wrote, you’ll remember that while its mostly presented as a kids show, it actually has a lot of valuable morals and stories to tell, especially for a young teenage audience. It has that fantastic distinction of being a fun kids show at heart but is unafraid to play with morality tropes and tell the kind of high school redemption stories we all love.

The enthusiastic protagonist is also such an endearing goof that you’ll love him in no time, much like the rest of the cast who are equally great to watch. If you want a space-fuelled adventure that dips its toes into adult themes, then this is the series for you!

On the other end of the spectrum, with a newer show that I covered earlier this year and another of my Top 5 Rider shows… Kamen Rider Amazons. This is a deeply flawed show, sadly, that was an exclusive to Amazon Prime Japan. This choice is more based on people maybe remembering the Guyver movies of the early 90’s or who have a fondness of Marvel’s Netflix shows. It’s a darker tale that is a nice contrast to the positivity of Fourze and is a much shorter watch at just 13 episodes.

When it comes to Super Sentai, there’s a common misconception that it will be of the same ‘quality’ as its adaptation, Power Rangers, and while there are cases like that, there are twice as many that aren’t and to showcase the best Super Sentai has to offer I recommend watching Kaizoku Sentai Gokaiger!

Gokaiger is the 35th Anniversary series and is an unabashed celebration of the franchise up to that point and the best part about it? The Gokaigers aren’t even good guys! They are literally pirates who steal the powers of previous Sentai in pursuit of a grand treasure. It’s an absolute blast and a loving tribute to the franchise’s long history.

Now, since I’ve little to no experience with the two other big TV toku franchises, I’m going to leave you in the capable hands of Josh from CollectionDX and Alex from My Shiny Toy Robots. Take it away, boys!

Ultraman X is a really solid place to start in terms of the Ultraman franchise. It carries the spirit of the original, easy to follow on its own and has some cameos from other Ultras should you feel like checking more out afterward. It’s definitely worth mentioning that Ultraman is pretty much the godfather of henshin heroes. He might not be the first or the most prominent any more, but I’d definitely go as far to say he’s probably the most iconic in Japan. The show really puts an emphasis on craft, with both the miniatures and suits a cut above what you see in other toku shows.

Personally, I’d say the real best place to start is definitely the original series (and with it so cheap on Amazon, there’s really no reason not to), but with a pretty sizeable back-catalogue on Crunchyroll now newcomers will be perfectly fine jumping in on any that take their fancy. Some will have crossovers with older Ultras, but it’s never done in a way that requires background knowledge beforehand so you can effectively jump in anywhere.

“Where there is light, shadows lurk and fear reigns. Yet by the blade of Knights mankind was given hope.”

If the above quote sounds super weird and/or interesting, then you might be into Garo. Garo is the story of a bunch of dudes called Makai Knights who fight monsters called Horrors. In a nutshell, Horrors are from another dimension called the Makai, and can be born in our world from the malevolence of humans. At this point, there are three distinct timelines for Garo: the original, the anime, and Ryuga’s timeline.

The original, main timeline consists of the three series (1, 2 & 4), two movies and several TV specials. If that seems convoluted, don’t worry. After a single season of the show every single one of those things will make sense. This timeline is all about Kouga, the Golden Knight Garo. Well, at least in seasons 1 and 2. And two of the movies. In season 4, the story shifts and follows his son, Raiga, who has inherited the title of Garo. Season 4 is amazing.

The anime timeline is stupid and garbage. Don’t watch.

The Ryuga timeline consists of two more seasons (3 & 5) as well as the Goldstorm movie. The entire existence of the Ryuga timeline is confusing and incredibly offputting for some people. However, if you are well-versed in the lore already, the deviations make sense and the shows and movie are ridiculously fun. Just watch Ryuga’s transformation from the first episode of Season 3. You’ll get what I’m saying.

A massive, massive thank you to both Alex and Josh for the opinions of Ultraman and Garo, respectively, and for contributing to this article since I don’t know dick about those shows so this is a learning experience for me too! Please go check out their respective sites and follow them! If any of these shows have peaked your interest, there are certain avenues you can find to watch them subbed if you look so I’ll leave the choice to you and I’ll see you all next Toku Tuesday!