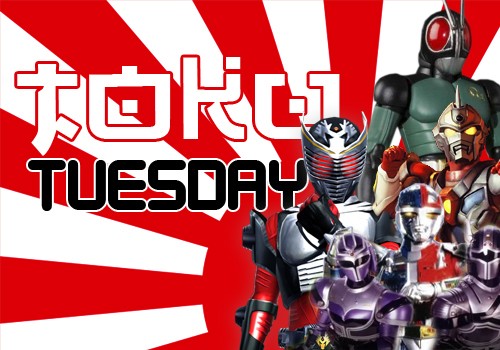 Last time I covered Japan’s attempt to adapt a western property but for most of the 90’s, the reverse was much more prevalent. Haim Saban’s adaptation of Super Sentai into the long-lasting Power Rangers franchise but, being the media mogul that he was, he didn’t stop there and others even attempted to steal the formula for themselves. This is going to be a brief history of the rise and fall of tokusatsu adaptations in the west.

Naturally, emboldened by the success of Power Rangers, Saban was quick to rush another series into production. Capitalising on the early 90’s fascination with the emerging VR technology (oh, how times have changed), Saban created a team of teenagers using footage from three separate Metal Hero shows to create VR Troopers.

The show proved successful at the time but pulling footage from Space Sheriff Shaider, Superhuman Machine Metalder and Dimensional Warrior Spielban proved exhaustive and soon they ran out of footage to use. VR Troopers ran for 92 episodes before going offline.

All was not lost on the toku-hero-in-cyberspace front though as Superhuman Samurai Syber-Squad was in development at the same time, a venture between Tsuburaya Productions (the studio behind Ultraman), Playmates Toys and DIC Entertainment to adapt Denkou Choujin Gridman for western audiences.

I’ll be honest; I never even heard of this show growing up, as my entire world was dominated by Saban’s shows, but from finding clips on YouTube I can see that this was a quick and cheap production. Clearly it was born out of the rapidly exploding toku adaptation genre and it only lasted 53 episodes.

The next show to appear spun directly out of Mighty Morphin’ Power Rangers and was the truly atrocious Masked Rider. Masked Ri-DURR, an adaptation of Kamen Rider Black RX, appeared in the three-part MMPR Season 3 opener, ‘A Friend in Need’.

As soon as Arnold Rimmer look-a-like Prince Dex made the jump to his own show, however, no further mention of the Rangers are ever made and the show became a bumbling ‘comedic’ mess. Masked Rider ran for 40 episodes and left a legacy that is both depressing and uplifting as no one would attempt bringing another Kamen Rider show to our screens for another 14 years but most of Masked Rider’s background music was later used in Digimon Season 1-3 and Digimon: The Movie.

Once Masked Rider was done, Saban didn’t rest on his laurels for long and put out Big Bad Beetleborgs. Adapted from the Metal Hero series Juukou B-Fighter and B-Fighter Kabuto, Beetleborgs was focused on a younger audience and was heavily merchandise-driven thanks to plot being about kids who becoming popular comic book characters.

Much like VR Troopers, Beetleborgs suffered thanks to a lack of footage and ended after 88 episodes. Out of all the non-PR shows Saban did, I think Beetleborgs was my favourite growing up, even if it was the silliest of the bunch — often having Batman ‘66 comic book effects to cover more violent scenes or having the Jay Leno-esque Flabber as the source of their powers.

After Beetleborgs had ended and with Power Rangers still the juggernaut franchise, Saban went a different route and produced a wholly original tokusatsu for the west based on Irish mythology but that’s a story for another time as it’s not an adaptation.

Earlier I said it would take 14 years for someone other than Saban to bring Kamen Rider to the west but in 2009, Adness Entertainmint adapted Kamen Rider Ryuki for the CW Network as Kamen Rider Dragon Knight.

The reason why the team chose Ryuki was that the series had 13 Riders in total (one of which was the first female Kamen Rider in the franchise’s history) and had lots of marketability. However, due to the Bandai toyline’s failure and flagging ratings, the show was pulled before the final two episodes could air, though CW was nice enough to air them online.

Even though the show had critical success (even winning a Daytime Emmy in 2010) and seeing DVD releases in Europe, South America, Mexico and East Asia (even a Japanese Dub!); Adness did not release it in the US and the plans for a feature length movie, a second season or even an adaptation of another Kamen Rider series have not come to pass.

Hell, 7 years have passed since and Adness Entertainment are more interested in Kpop and Korean fashion if their website is any indication so more Kamen Rider from them is highly unlikely.

As of 2016, Power Rangers is still going strong after 22 years while all the others I’ve talked about above have faded into obscurity and nostalgia so what does that mean for tokusatsu adaptation in the west? Regrettably, it seems that we’re unlikely to see more adaptations in the future and that’s just sad in this humble reviewers opinion. Personally, I have a ton of ideas how some of the newer Heisei-era Kamen Rider shows could be adapted but in the current climate of television production; would they succeed?

A question for the comments, perhaps but for now, thank you for reading this little retrospective and I’ll catch you all next Toku Tuesday!