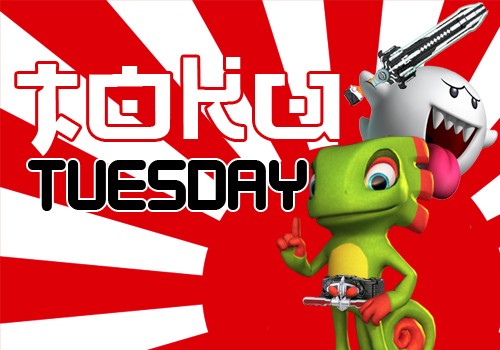 I think I’ve established previously that the two big tokusatsu mainstays — Super Sentai and Kamen Rider — have a 52 episode run every year but, as way to celebrate Kamen Rider’s 45th anniversary, Toei Company not only produced their regular TV offerings for TV Asahi but also a Amazon Prime exclsuive mini-series.

Why mention this? Because I’m going to be looking at both of them and highlighting why one sucks and one is awesome. Let’s start with the basic premises:

When his life is tragically cut short, Takeru Tenkuji enters a Faustian bargain to regain his life by gathering 15 souls of historical figures. Along the way, he must contend with malevolent spirits intent on annexing the human world as well as his childhood friend who is attempting to gather the very same souls to restore his sister to life.

Sickly shut-in, Haruka Mizusawa, is thrust into a secret war against an army of beasts with a thirst for human flesh and is torn between two worlds when he discovers he is one of them. He strives to find his humanity as part of the creature-hunting Extermination Team while the mysterious Jin Takayama hunts the monsters for his own reasons. They’re two side of the same coin; the Alpha and the Omega.

Both sound pretty awesome, right? Unfortunately, the reality is much more black and white. Kamen Rider Ghost is the TV Asahi series and while the ghost-hunting premise and suit are both great, the writing is sub-par at best and fucking atrocious at worst. Head writer for the show, Takuro Fukuda, has previously worked as secondary writer for Ultraman Max and Ultraseven X. The fact that I’ve never even heard of those series tells me his work isn’t note-worthy and the fact that I gave up on Ghost after 16 episodes speaks volumes. I haven’t given up on a Kamen Rider series since Wizard (and I’m constantly told I should give it another shot because it’s better than I initially gave it credit for).

I would say that part of the problem is the time-slot and the primary audience. Airing at 8:00am on a Sunday, naturally the audience is children and Bandai is a major sponsor of the show, therefore pushing merchandise is priority but does this mean that the show should be nothing more than a half-hour toy commercial with paper thin characters and awful slapstick? Short answer: no. Kamen Rider Fourze, which I covered before, was written by the head writer of Kill La Kill and the series composer of Gurren Lagann, making it an emotional tour-de-force about friendship, acceptance and parental abandonment. Kamen Rider Gaim was written by Gen ‘Urobutcher’ Urobuchi; a man known for the critically-acclaimed Puella Magi Madoka Magica and the dystopian crime thriller Psycho-Pass and he made a series about fruit-themed samurai into an interesting dark story of betrayal, futility and acceptable losses. That’s just two examples; aired in the exact same time-slot with the exact same sponsors for the exact same demographic and they did not talk down to their audience like Ghost does. It’s a narrative mess, every character is comic relief and there is no real threat at any point. Light fluff is good but you can only really appreciate it if you equal it out with a harder edge.

Speaking of the harder edge, we have Kamen Rider Amazons, an Amazon Prime exclusive mini-series for Amazon Japan. Yes, that’s a lot of Amazon but you can’t deny it’s a cute marketing gimmick. As a quasi-reboot of the original 70’s series of the similar name, Amazons takes a leaf out of Marvel’s playbook by offering a darker, more compelling miniseries that stands apart from it’s mainstream fare on a streaming platform. It worked for Daredevil and it works for Amazons!

Now who could they get to write such a show? Something Kamen Rider but with a much darker edge? Hmmm. Oh! How about veteran writer Yasuko Kobayashi? Head writer for Kamen Rider Ryuki, Den-O, OOO, a half dozen Super Sentai shows and Attack on Titan. Sie sind das Essen und wir sind die Jäger!

While the first episode could be considered a 45 minute slog, it at least sets up the world pretty effectively and establishes the tone of the series. This is a show for adults, not the kiddies. The darker vibe even extends to the look of the show as not only are people and monsters eviscerated on a regular basis but the entire show seems to be shot day-for-night. Is there no sun in this accursed country?

Also — Amazons shits all over Ghost in the theme song department. The use of Armor Zone by Taro Kobayashi at the end of every episode has shades of JoJo’s Bizarre Adventure’s Roundabout to it. Which Yasuko Kobayashi was also head writer of. Seriously, this series just exudes pedigree.

So what is my point? Is this just another toku weeaboo complaining that a children’s show isn’t made for him? Partly, yes, but not in the way you think. I wrote this article to highlight the difference between two shows that belong to the same franchise airing concurrently.

It’s not about the disparate audience demographic, it’s about the actual quality of the product. While Ghost has some of my favourite suit designs of all time; that’s all it’s got as the effects are cheap, the characters bland and the product pushing is egregious while Amazons is content to let the engaging story play out with characters you can easily get attached to.

You can currently find both Kamen Rider Ghost and Kamen Rider Amazons subbed for free by Overtime Subs.

What are your thoughts on either Ghost, Amazons or both? Any suggestions for the next Toku Tuesday? Leave your comments below and I’ll see you all soon!