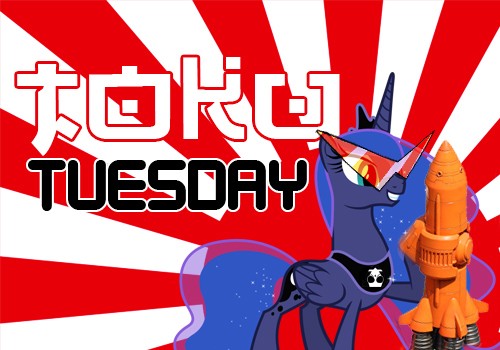 The series follows an enthusiastic transfer student with the look of a delinquent and a heart of pure gold, Gentaro Kisaragi, and his endeavours to make friends with everyone in the school. Gentaro is pure, unadulterated awesomeness. To go with the Gurren Lagann analogy, he’s the Kamina of the show. His sense of wonder and desire to befriend everyone could be construed as naivety and is often treated as such by some characters but ultimately, he’s a being of sheer will and conviction. He truly believes in the best people can be whether they be friend or foe.

He falls in with space-case Yuki and the perpetually-ill tsundere, Kengo and soon becomes embroiled in a plot to use the students of Amanogawa High School
as guinea pigs for a nefarious organisation. Thus, Gentaro takes Kengo’s place as Kamen Rider Fourze!

As their adventures go on, our trio (soon dubbed The Kamen Rider Club, in true Japanese school tradition) begins to grow as they add a motley bunch of outcasts and clichés. Shun and Miu, the self-proclaimed king and queen of the school, who are actually pretty insecure and in desperate need of someone who won’t bow to their every whim and accept them for who they are. JK (pronounce ‘Jake’), an ‘information broker’ and massive coward who manipulates everyone around him, until he comes face to face with Gentaro. Tomoko, a shy goth girl who fell in with a bad crowd but found true acceptance with the Kamen Rider Club (a group she inadvertently inspired in early episodes). Each character tends to be introduced to the team in their own two-parters but, thanks to the serialised nature of the show, they’re reoccurring characters before they become club members.

The Zodiarts are your bad guys du jour and are, fittingly, based upon the constellations while their masters are the Horoscopes, 11 lieutenants who mostly manipulate troubled students into becoming monsters and the head honcho, Sagittarius. They run the gamut of utterly evil to simply misguided and they take some surprising turns with Horoscopes like Aquarius and Virgo. Cancer has to be my favourite though, he’s such a ham and delightfully evil plus his design is pretty menacing.

Joining the Kamen Rider Club undercover is the prickly Ryusei, aka Kamen Rider Meteor. He infiltrates the school and the group with a timid façade but his faux-cowardice doesn’t hold out forever as his mission and his true nature reveal themselves over time. As much as Kengo has a mild disdain for some of the others, Ryusei is the unwilling straight man to many of the group’s eccentricities early on but eventually comes around, even winning the heart of a certain witch (O-T-P! O-T-P! O-T-P!). He also screams like Bruce Lee when he fights. It’s kind of hilarious.

Fourze’s main gimmick are Astroswitches, powered by some ill-explained Cosmic Energy. Fourze is a portmanteau of ‘Four’ and ‘Zero’ as both a nod to the 40th Anniversary and that he has 40 switches to access various weapons and forms.

If you’re interested in the show, I definitely recommend watching the movies too since events, characters and power-ups present in the movies show up in the series proper too, which doesn’t happen too often in Kamen Rider. Luckily, the movies usually take place within the timeline of the series so it shouldn’t be too much trouble to find out where they slot in.

Kamen Rider Fourze is probably my favourite KR series (but it has tough competition, which I’ll get to). It’s action-packed, it’s funny and incredibly charming and heart-warming. It dances on the fine line between goofy monster-hunting friendship adventures to angst-ridden drama and while it may stumble, it gets to the finish line with a genuine smile and hearty handshake.