Browsing the "the dunce corner" Tag

–It may come as no surprise to some but Summer is not my favorite season. And I can only speak for my particular region of the world but it […

The Dunce Corner – Beating The Bishop

Dusted off after having been down in the brain-hole mining for comedy gold, Fools gold more than likely, to bring you all new Dunce Corner! Or as I like […

The Dunce Corner – Back To Skool

It may not feel like it outside here yet but I guess summer is over. At least the summer holiday is, Sorry kids

The Dunce Corner – High On A Mountain Top

Howdy folks! I have to say, normally I don’t do religious based humor outside of a few old Christmas cards I’ve done. But I don’t think it’s too blasphemous, […

HAPPY SUMMER SOLSTICE!!! ~If you’re a dweller of the Northern Hemisphere that is. ~And you are into that sort of thing. As of today, June 21st, it’s officially the [… 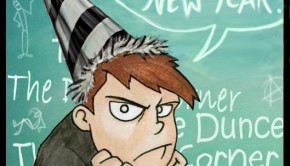