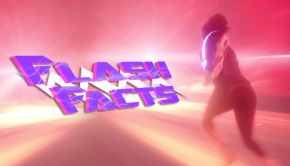 Flash Facts – “Out of Time”

Mmmm, whatcha saaaay! Mmmm, that you only meant well? Wells, of course you did…