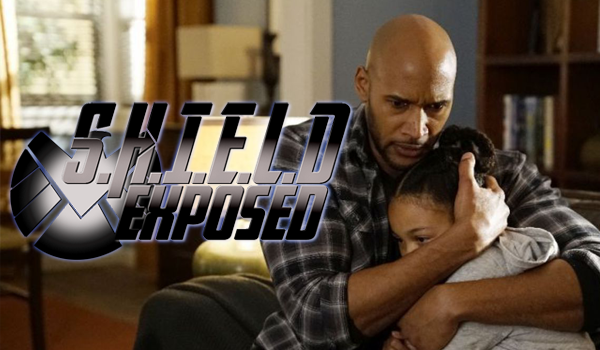 How do I unpack this box of ‘holy shit’ without devolving into hyperactive marking-out so let’s take one point at a time, shall we?

The collapse of the Framework, a seemingly spiteful act on AIDA’s part, gives us a truly heartbreaking scene and I have to give kudos to both Henry Simmons and Natalia Cordova-Buckley as Mack and Yo-Yo because it got me on a deeper level than I thought it could. Seeing the strong man-mountain suffer a horrendous emotional breakdown alongside the woman who needed it to happen to get him back is awful but utterly compelling to watch.

On the opposite end of the emotional spectrum, we had the rest of the team thwarting AIDA’s plans through snark and shady bullshit, which I loved! Between the sleight of hand with Jemma’s own LMD dying in her place or Coulson acquiring the Spirit of Vengeance! Oh shit! That’s both incredibly awesome and incredibly dangerous and the after-effects of Coulson’s ‘deal’ with it will probably be the focus of next season but from even my cursory knowledge of the Ghost Rider mythos, I can tell that it’s going to be bad news.

Then there’s Robbie and Daisy teaming up in a fantastic fight with The Superior (and some other jobber who has multiple LMDs despite us not knowing who he is) and performing a manoeuvre that should really have a name but I can’t think of one off the top of my head.

We finish out the arc on Radcliffe, the man who arguably started all this, as he sits upon a beach as the sun literally sets on the Framework. He muses about how his ambition and his hubris ultimately lead to his current fate, alone within a dying world of his own creation. He doesn’t get to finish his thought before disappearing in one of the most beautifully poignant shots of the show.

The team’s ultimate fate however is much less definitive as they are kidnapped during their meal (paralysed by a device very similar to the Sonic Taser that Obadiah Stane used in the original Iron Man movie) and taken away to parts unknown but we get a glimpse of where that is in the stinger. Oh. OH. OHHHHHHHHHH BALLS. That’s not good, is it? Because unless next season will be called Agents of S.W.O.R.D. (and part of me really, really hopes that it will) that’s bad news for Coulson and, presumably, the rest of the team.

As a whole, Season 4 has been a rollercoaster of a season thanks to brilliant writing, amazing character development and expanding the MCU in a way that doesn’t feel forced and uninteresting. Multiple arcs with an overarching narrative seems to be the way to go for this show and I hope this continues. We won’t be seeing the Agents of S.H.I.E.L.D. until 2018, most likely allowing the Inhumans TV show room to breathe and will no doubt take that show’s place after it’s eight episode run in a mid-season premiere.

Would you guys be down for some Inhumans coverage? Let me know in the comments and I’ll see you all next year!