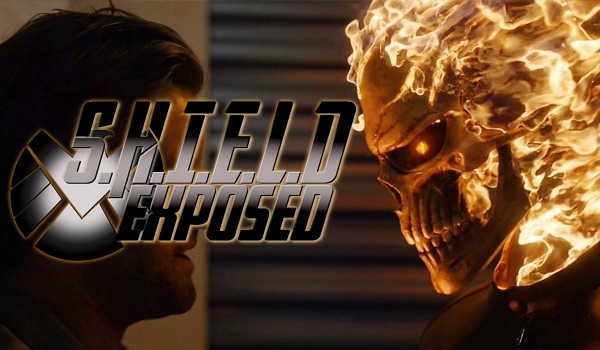 What’s the over/under on most of this season’s episode titles being fire puns?

Because I’m betting Ring of Fire’s going to make an appearance by the end of the season.

This week on SHIELD, the disparate team is finally reuniting and the story finally progresses. Am I the only one tired of the concept of the team having to get back together every season? We have it all the time on SHIELD, we’ve had it on The Flash this season and even Legends of Tomorrow did it. It’s tiresome.

More intrigue regarding the mystical macguffin, the Darkhold, and Robbie’s familial connections to it and I have to say… I wasn’t expecting the sinister Uncle Eli to be so reasonable. Or nice. Or anything like he’s presented here so he’s clearly not the spirit inhabiting Robbie like the comics so is Robbie possessed by the actual Spirit of Vengeance? Did he make a deal with Mephisto?

Questions for another time because we have a rather cool car chase through the LA River to do and no Grease Lightning jokes to be had. Christ, AoS writers, do I have to do all the puns for you now?

Meanwhile, May is wide awake and is being nursed back to health by Radcliffe and AIDA, much to Fitz’s comedic dismay. I do like AIDA’s understated jokes and Mallory Jansen brings some much needed gravitas to the scenes that need it. I wish we were focusing more on the LMD plot than the ghost plot but what can you do? You book Ghost Rider, he’s getting the most screen time.

Speaking of, Robbie’s got jokes too and it made me chuckle. Nice to see him have a sense of humour because he could easily be played like a grim-dark edge lord but Luna still remains likeable and utterly bad-ass. Matching him up against Hellfire (hurray for the returning Axle Whitehead!) was a good move.

I do like that they didn’t go the cliché jealous girlfriend route with Simmons when she meets AIDA for the first time. FitzSimmons and Radcliffe working on the LMD process is going to be interesting to see but how is Simmons going to keep this secret from her lie detector test tomorrow? Dun-Dun-Dullllllllll! Who cares? I don’t.

Let Me Stand Next to Your Fire is an entertaining enough episode and further proves that the LMD and Ghost Rider stories are infinitely more interesting than Daisy’s crusade. Come back next week when we’ll be breaking into the big house in Lockup.