Confused? Good. That means you’re sane and you’re not a citizen of The FP. We start the episode off discussing this “gem” then transition into more Muppet talk. Eventually we discuss the possibilities of Jurrasic Park IV. I also want to petition paleontologist to change the name Raptor to “Land Jaws.”

This week we FINALLY get around to answering Pridak’s question. I thought I’d include a picture of the airship I was talking about in the episode. To this day that airship still captures my imagination. I remember sitting in the theater watching that float on screen for the first time. I wanted to include the first couple minutes of the opening of Pokemon The Movie 2000 so you could see it in action but couldn’t find any videos. You can also click the picture to get more info about it. 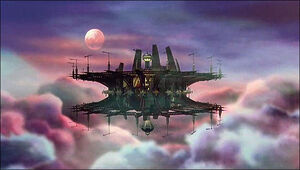 Here’s the answer to this week’s trivia question. CHALLENGE ACCEPTED.

I miss when Rareware was good…