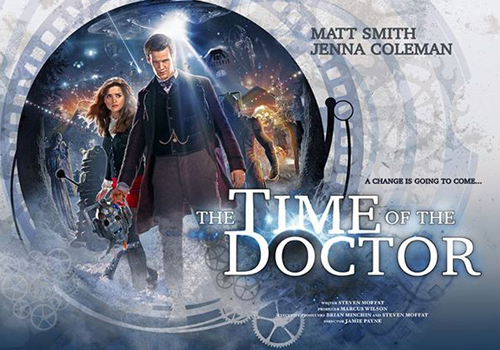 Review: Doctor Who – Time of the Doctor

Eleven’s hour is over now, the clock is striking Twelve’s.

Well, that was different to what I expected. When it was advertised that this episode would be the Siege of Trenzalore, I wasn’t expecting the over-arching theme of Smith’s of fairytale whimsy to feature so strongly. While this episode wraps up a lot of the outstanding plotlines of this run, it does so a little clumsily. There’s some stuff you just have to let slide for the sake of the story and I’m okay with that but what I really couldn’t stomach were the jokes. The nakedness and the Christmas dinner stuff in particular fell flat on their respective arses. The repeated sending of Clara back to her own time was tedious too. Nine did it with Rose and it was an important moment, to do it here again not once but twice felt incredibly forced.

So what did I like about this episode? The Siege and the notion of “The Man who stayed for Christmas.” Yeah, it’s a little ham-fisted to call a town Christmas to justify a cool title but it ties into the fairytale aspect of Eleven. The return of the crack (its reveal was very chilling indeed) and its nature as a portal back into our universe for the Timelords was a good way of taking something we haven’t seen in a while and combining it with a something a little newer to create a new plot line. Will there be more cracks in the future? Who knows, but I look forward to finding out.

The Siege itself was an immensely fun sequence. Sans TARDIS, the Doctor is forced to wage a defensive war of attrition against his gathered enemies, all of whom want to stop the return of the Timelords. With a little help from the Papal Mainframe (remember those religious soldiers from The Time of Angels and A Good Man Goes to War? Same folks and they’re actually good guys.) the Doctor takes on all comers. From Sontarans (for a second, I thought it was Strax but probably just his batch brothers or something) and Weeping Angels to Daleks and Cybermen. His role as Sheriff is obviously taking its toll as we see him visibly age over the course of 300 years, greying at the temples and even walking with a cane as he faces down a wooden Cyberman. He’s become a part of this town and they love him, celebrating his every victory. It’s a nice change of pace to see the Doctor stay in one place instead of running away in his TARDIS.

Something that came up as I was rewatching was the mysterious Mother Superious of the Papal Mainframe, Tasha Lem. She is obviously an old friend of the Doctor, even perhaps an old lover but little phrases and details raised some red flags for me. Her mannerisms, ability to fly the TARDIS and, as the Doctor says, she’s been fighting the psychopath inside her all her life. Is… Is she River Song? I know that sounds utterly ridiculous but all those little things add up to her being River Song OR that the role she’s playing right now was meant to be for River’s return and something changed? I dunno, it just bothers me.

Through continuity shuffling, the Doc reveals to Clara that this is his final incarnation, thanks The War Doctor (affectionately called Captain Grump) and the Metacrisis aborted regeneration (Thanks, Ten, you vain sumbitch.)
But thanks to some help from on high (the Timelords) the Doc receives a whole new cycle of regenerations and uses the the energy to destroy the Daleks. The day is saved and in the aftermath, Clara and the Doctor meet inside the TARDIS for one final farewell.

I absolutely loved this scene, unlike Tennant’s masturbatory 20 minutes culminating in the ultimate puss-out line,  Smith approaches his impending regeneration with humility and comfort. You can really tell that he loved every second of his tenure and gives a sly fourth wall breaking nod to the audience. His monologue is especially profound and reassuring, letting the audience know that even though he’s gone, he’ll always be the Doctor. There’s a sweet hallucinatory scene between Eleven and Amy Pond which I found unintentionally hilarious since both were wearing wigs (Karen Gillan shaved her head for her upcoming role in Guardians of The Galaxy.)

With a quick flash, Peter Capaldi comes into the role with bug eyes, a distaste for the colour of his new kidneys and no idea how to fly the TARDIS. It follows the formula of the recent regenerations but I can’t really tell you much about Capaldi until we see him in some episodes but I’m hopeful.

The Time of the Doctor is flawed, I’ll be the first to admit it. It futzes with continuity and a lot of the early jokes are dire but the main plot is intriguing and ties up a lot of the remaining plot threads. Matt Smith’s final outing was fun, emotional and brings the Eleventh Hour to a close as the bell chimes Twelve. Goodnight, Raggedy Man. We will never forget you.