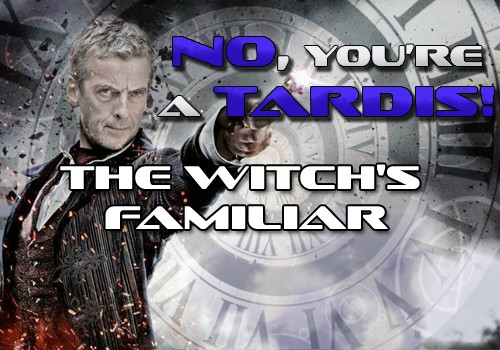 Review: Doctor Who – The Witch’s Familiar

Ambivalence, thy name is Doctor Who.

So, the second part of the Season 9 opener, eh? Took until two minutes before I began writing this to figure out that the titles were referencing Clara. Which is funny because I don’t remember her doing a god damn thing in this episode. Seriously, what did she do? Go on, I’ll make a cup of tea while you rack your brains trying to think of something she did in this episode other than be set dressing and/or a damsel.

And that’s another thing! The whole tea thing! Sure, the Doctor bombing around in Davros’ chair is pretty damn fun, I’m not denying that but this line. THIS LINE.

This is Moffat’s mission statement nowadays. I can handle a lot of bullshit in my fiction, especially science fiction, but that line is tantamount to “Fuck it, we’ll do it live!”. It’s what’s been bothering me about the last season of Who and what we’ve so far in this one. No one is controlling Moffat. A couple years ago, that was fine because within a structured season, when he was writing the odd episode, his work stood out. Now it’s the norm and there’s no structure anymore.

Most of the old, outstanding plot lines from RTD have been resolved so what’s left? Anything Moffat can think up on the fly. Literally throwing shit at a wall to see what sticks…

Okay, let’s talk about the few good points because god knows the main plot is dreck…

This shot is amazing. One thing I do like that they’ve done since Moffat took over is emphasise the legacy of the Doctor. He’s had many lives and they’re all important, not just the last two or three. It’s a shame we didn’t see a Tom Baker stand-in do some stuntwork against the… invisible assassins… HurrrrrghMOVING ON. Davros. Holy fuck, who knew we could almost have a compelling villain on our hands? Hell, who knew Davros had a sense of humour? Just imagine if this was the last Davros story and he’d become more than a Dalek with a flesh face. Shame that doesn’t happen but for for the briefest instant, we saw something great and I applaud Julian Bleach for an outstanding performance.

Hey Missy, you so fine. You so fine, you the only reason I got through these episodes. Hey Missy. *clap clap*

Seriously, Michelle Gomez is taking what John Simm did and dialing it up to 12 and I’m enjoying it immensely. She’s Smith’s playful Doctor with Tennant’s wit and Eccleston’s hard edge all rolled into one schizophrenic Mary Poppins figure. To paraphrase Nina Conti: “They’re all perfectly likable traits but with tits, they’re fucking sinister.”

So this episode was a wash of reused ideas, only saved by two compelling performances and a clever camera shot. What have we got next week? Oh, The Unquiet Dead mixed with The Waters of Mars. Who’s writing it? Toby Whitehouse?