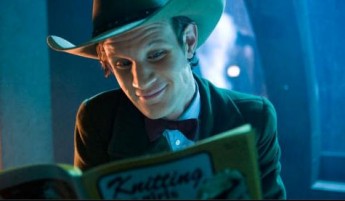 Review: Doctor Who – The Wedding of River Song.

So this is end, my friends. “NO You’re a TARDIS!“ explores the day the Doctor dies and the day the mystery of River Song is finally revealed. You are all cordially invited to The Wedding of River Song. Time is broken and so was my mind during the opening sequence of this episode. Hot air balloons carrying cars, the Oriental Express, and Winston Churchill as the Holy Emperor of the Roman Empire. It’s a crack-tastic opening and serves to show you what “all time happening at once” would look like. This mish-mash of the centuries is the result of the Doctor not dying on the shores of Lake Silencio and serves as framework for explaining how one woman caused all of this, before meeting up with Amy, Rory, and River.

I’m going to avoid getting into the details but this episode is one that really needs at least two viewings. Well, I did but the clever amongst you might not. Stephen Moffat loves to do finales you have to watch multiples times to get the gist of them, doesn’t he?

I know there were rumours circulating this would be Matt Smith’s last season but to quote Kevin Spacey: WRONG! Our dear raggedy Doctor has at least another season left in him and if the promise of a more covert Doctor and Dorium’s ominous predictions hold true, we may be looking at a far darker tone next season, which I’m in favour of. I love the light-hearted adventures we’ve been having but I’d like some more darkness. A few more episodes like ‘The Doctor’s Daughter’, ‘Fear Her’ and ‘Night Terrors’ wouldn’t go amiss in my opinion.

The cast is on top form for River’s swan song (Did you see what I did there?), delivering solid performances. Not outstanding but definitely solid. The episode itself is densely packed, being the first one episode finale we’ve had since….. Ever. It can feel too short and too long in places but it does what it has to. It’s not as good as last season’s finale but better than others.
The twist at the end came as a surprise to me. Not the revelation, but how it was achieved having expected something different to what we got but then the solution was staring me dead in the eye the whole time so maybe I’m just dumb. Either way, I’m glad they did it and we get more Smith!

I’m really hard-pressed to give more of an opinion than that so I turn this over to you, dear readers. What do you think will happen next season? Who will ask the question? How will Jack respond to this new Doctor should he return. When will they address the passing of Sarah Jane Smith? And when, oh when, is Christmas going to be here because it can’t come soon enough!
Give me your answers and tell me what you thought of the episode below and join us again soon for another Who-tenanny on the Website of DOOM!