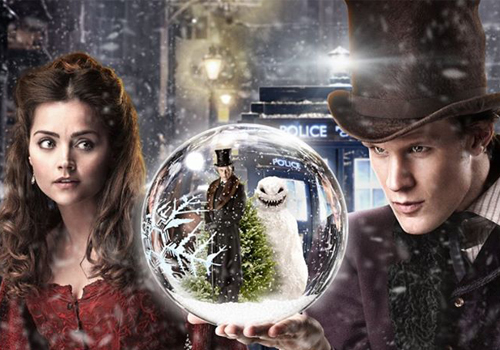 I’ve been having trouble writing this article for a number of reasons. This episode is damn near perfect in terms of character but lacking in villains. Sure there are villains, some incredible talent for that matter, but they seem so inconsequential in the grand scheme of things because all we really want to see is an hour of the Doctor and Clara and Vastra and Jenny and STRAX!

Most badass villain, only on screen for 2 minutes

Another Christmas, another adaptation of a Christmas classic, this time The Snowman. I said it last year and I’ll say it again, I’m waiting for the Great Escape adaptation into the Who-niverse. Richard E. Grant and Sir Ian McKellan will be your underutilised villains for this evening; taking the forms of embittered Scrooge puppet and evil psychic snow, respectively. They’re really wasted in this episode and that’s a damn shame because having these two in your episode should be a highlight but just like Bill Bailey last year, they take a real backseat to the main attractions. A lizard, a lesbian, and a potato walk into a pub….

Returning from the Battle of Demons Run are the (now married) Madam Vastra and Jenny and (freshly dubbed: “the potato one”) Strax as the Doctor’s entourage, keeping watch over him as he hides away in seclusion above the clouds, determined to ignore humanity’s plights. One would think that a man who can travel throughout all of time and space could ignore humanity much more effectively than hiding a couple hundred feet above Victorian England but hey, we need a set piece. Vastra and Jenny are a very welcome return, further expanding on the Sherlock Holmes dynamic they built in their previous appearance and Strax returns as both footman and comedic foil. These lot are a fantastic addition to this episode and do a lot to lift it above its average plot. Knock and Run: Doctor Who edition

The big introduction to this episode is obviously Clara, the returning Jenna-Louise Coleman and yet again, we’re introduced to her as a potential companion only for her to be killed! Not sure if she’s competing for Rory’s death count or there is more to her appearances than meets the eye. Personally, I feel a little ripped off that we’re going to have yet another modern companion when Victorian Clara is delightful enough to do the job! Its not like there will be much difference between these three incarnations of Clara Oswin Oswald but a Victorian Clara would bring a fun new perspective to situations but I trust the actress enough to make her modern incarnation as fun and cute as her past and future.

Stop that! He’s a married Timelord.

Matt Smith is solid as always and its fun to see him take a shine to Clara and for the would-be companion to deserve it right from the get-go. We see that the Doctor, despite he protests, wants a companion. Going so far as to introduce Clara (and us) to the TARDIS, which has gotten a nice little retrofit since Amy and Rory’s demise. It’s a little smaller but evokes the rich history of control rooms past and that’s always a good thing.

The Snowmen is a fun episode with a ton of character and whimsy to carry you along and keep you invested to the end. We’ll not see anymore of Season 7 ‘til April 2013 and it can’t come quick enough so to keep you salivating, check out this trailer and I’ll catch you guys in April!