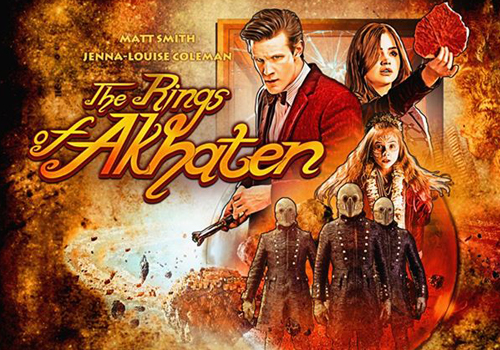 Review: Doctor Who – The Rings of Akhaten

Where am– Nope, not doing that again. I’m back and rumours of my wifi abduction were greatly exacerbated by some technical difficulties but for now, we’ll raise our hands to the sun, clear our throats and sing our praises for this episode. Nope, couldn’t keep a straight face.

I didn’t like The Rings of Akhaten. I thought the story was lacking, the villain little more than a Poundland Jack O’Lantern and a weak first trip for our companion. That’s not to say it failed utterly, there was good character interaction and a deeper look into Clara’s past.

I’m more of a Dandy man, myself.

The Doctor starts the episode looking into Clara’s past, following her throughout her life. From her parent’s first meeting to her mother’s death, the Doctor observes but there doesn’t appear to be anything significant in her history apart from maybe her parents chance encounter, though that has resolution so there real isn’t anything in this Clara’s past to indicate who or what she is. It’s good that the writers are allowing us to go along with the mystery the Doctor, allowing us to process the clues like he does and there have been some interesting clues, such as the missing ages in Clara’s 101 Places to See book. Still, it’s early days so speculation is rife but I’m sure we’ll be finding more out as we go along.

It’s not even the same leaf!

The main crux of the episode is the typical child sacrifice to a god scenario, where the new companion tries to help and then gets told “we don’t walk away” by the Doctor and urrrrrgh, I can’t bring myself to write about the main plot because its dull and boring and dumb. The “old god” is really weak sauce, being a parasitic sun or Jack O’Lantern that feeds on memories and snooooooore!
Mr. Cross, sir, if you’re going to throw the term “old god” around and you DON’T have the Doctor fight Cthulhu, you’re doing something very, very wrong. I mean, c’mon! He’s already had a go at Satan, let him have a bash at the old ones! Get Neil Gaiman to write it, Keith David to voice Cthulhu, we’ll have good times!

On the plus side, the setting of this episode has a great Mos Eisley vibe, with plenty of new and exotic aliens inhabiting it, though a couple are clearly kitbashed from older costumes. The score for this episode is pretty good too, with epic choruses providing a bed for Matt Smith’s heartbreaking monologue.

All in all, I can’t recommend the episode on its own but if you’re watching the entire series, there’s some stuff that will keep you interested until the end. My hard drive died shortly after I posted the Bells of St John review and I’m obviously catching up on reviews so be sure to check back in a couple days when things will be heating up in Cold War!