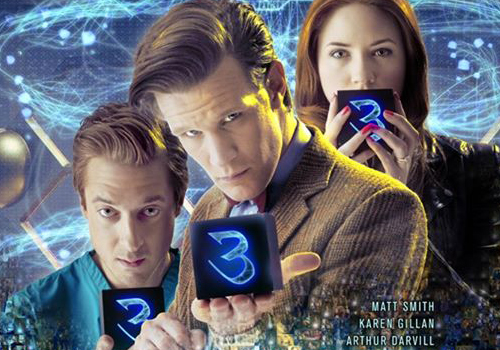 Review: Doctor Who – The Power of Three

A year of inactivity, day-to-day mundanity and the Birdie song. This really is the Doctor’s idea of hell. The Power of Three is written by Chris Chibnall, who has written some of my favourite episodes of Torchwood and Life on Mars as well as this season’s Dinosaurs on a Spaceship, so you know he’s good.

Can I bring up two things before I get into the episode proper? One: Every episode for this season has featured the title card rendered in a way to reflect the subject of the episode. It’s only a small thing but it’s a very nice touch.

B, I mean, Two: Brian Pond. Can we have more of him please? He’s the new Wilf and I love him. Look at him, seriously. He’s brilliant.

The Power of Three could have easily been a two-parter and but I think it works better as a stand alone episode, despite the rushed ending. The premise of Po3 is interesting, intriguing and very fun, much like Chibnall’s previous episode. It’s packed with humour, tender moments and really sells the difference between Doctor Life and Normal Life with both having their merits.

The Doctor spends a lot of this episode being introspective and explaining why he is the way he is, especially with the Ponds. Amy was the first face he saw in his 11th incarnation, Rory has stood by him as a friend and as a stalwart protector, and Brian is delicious. There’s a lot of really nice sentiment and it can be a tough sit when you are very aware of what’s going to happen next time (which I’ll get to.)

The big surprise this episode is in the form of the new leader of UNIT: Kate Stewart, the Brigadier’s daughter. She is a wonderful character and an intellectual match for the Doctor in every way. She’s cunning, resourceful, sassy and I really hope she turns up again. Having an ally in UNIT was one of the earlier Doctors’ biggest weapons in their arsenal but given this incarnation becoming more war-like, “weapon” might become more of a literal term than I mean it to be.

The resolution of the episode is rushed, the villain is forgettable, but the message is no less truer for it. This trio has been one of the strongest Doctor/Companion groupings in a long time and I’ve enjoyed every moment of their adventure which brings me to the next episode: Amy and Rory’s departure. I don’t know how it will come about but it’ll be emotional, I know that much. We’ve been with these characters for 2 and a half years now and we’ve (literally) seen them grow into the capable companions they are today and I truly hope that the next episode will be their finest hour. Power of Three is a fun, if forgettable, episode but has a lot of tenderness and humour to it so it’s definitely worth a watch.

A quick shout-out to Dave Dillon-Thiselton, our 100th fan on Facebook! Thank you to you and to everyone else who has supported us and we’ll try to keep you entertained for years to come!