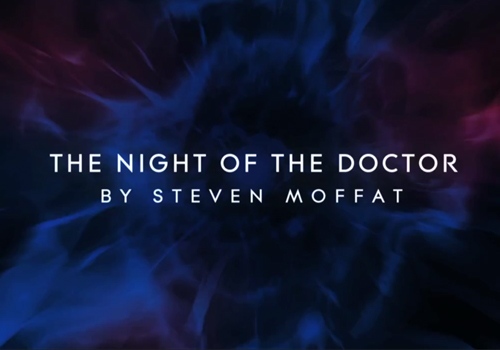 Review: Doctor Who – The Night of the Doctor

When last we met, the internet was freaking out over the revelation that John Hurt was an unspecified regeneration of the Doctor. Six months on and a 6-minute minisode later and the internet is flipping its shit once more! What over? Spoilers… But thanks to the web based nature, you can check out The Night of the Doctor on youtube legitimately, if you haven’t already. But be warned, I will be launching into a spoiler-filled analysis after the video.

I expected a couple things from this episode that I got, quick rescue setup, mysterious dealings, origins of John Hurt’s Doctor but this? I never expected this. Paul McGann has been described as a Mayfly Doctor because he only appeared in the 1996 TV Movie (Maybe we should review that at some point…) and was only ever seen as the 8th Doctor in comics and audio books. To see him return on screen is a blessing and I lapped up every single minute of it.

What’s interesting about this minisode is that this is clearly during the Time War, as Caz reels in horror at the discovery of a Time Lord. She hates him. Truly reviles what the Time Lords have done to the universe during the course of the war, even going as far as to say there is no difference between them and Daleks. Much to the Doctor’s horror, she would rather die than let him help her. It’s truly shocking to see this. We’ve seen hintings at it in Matt Smith stories but to see someone fear and loathe the Doctor when all he wants to do is help is horrible to say the least. Older and a little scruffier, Paul McGann’s Eighth Doctor is brilliantly played and as he comes to face with the Sisterhood of Karn (last seen in 1976’s The Brain of Morbius) he is equally mocked for his inability to fight against the Time War and implored to become something other than the Doctor. I love the callouts to the Eighth Doctor’s companions and I believe this is the first time the Big Finish audio books have truly been recognised as canon. Good one, Moffat! This minisode is a must-see prequel to the upcoming 50th Anniversary special and hopefully you have and not just ruined it for yourself with my ludicrous typing. I’ll see you guys real soon when No, You’re a TARDIS returns for Day of The Doctor.