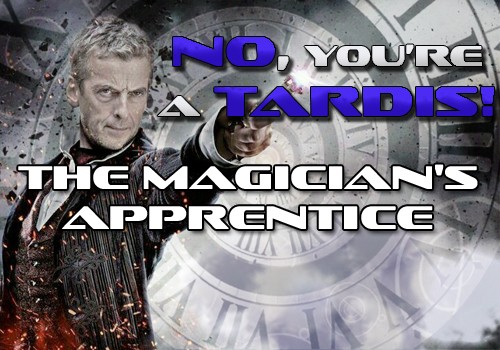 Review: Doctor Who – The Magician’s Apprentice

You all excited for the brand-new, explosive, heart-pounding, dog-frightening season of Doctor Who? ARE YOU?

No, me neither so I figured I’d change up the formula a bit, something more akin to our Tease Me, Baby! trailer reviews. Instead of going in depth, I’ll just give my brief thoughts on stuff rather than recaps because, frankly, I’ve got other shit I’d rather be doing than talking about mediocre garba–

Well, fuck me then. The opening teaser is pretty interesting, I’ll give it that and to have the scene bookend the episode was a brilliant choice. Okay, that was good, what else have you got Moffat?

Despite Clara being the main reason for me being unhype about the new season, Jenna Coleman plays her pretty well here as an agent of UNIT. Throw The Master into the mix and you’ve got a fun hate/hate relationship that’s more compelling to watch than Doctor/Clara one, to be sure. Yup, this is exactly why I was ambivalent towards the new season (the fact that it was pushed back to almost October didn’t help). Less than 30 seconds within the same scene as the Doctor and Clara is back to the doe-eyed doofus that I despise. How’s Capaldi’s performance?

Piss-poor as it turns out. Maybe it’s because Capaldi’s Doctor has suddenly become Smith’s Doctor or maybe it’s because, for a really stupid reason, the Doctor is convinced he’s dying. Also, Moffat? Bubala. We’ve all seen Mad Max, mate. Pull your head out of your plagiaristic arse.

Yaaaaay, Skaro’s baaaaack… Are we going to see the Time War 2: Trouble in Jamaica once Gallifrey reappears? Probably not. I’m mildly interested to see how this plays out because there’s potential here for some fantastic scene but I’m not holding my breath.

The Verdict
Mediocre. Very mediocre. There’s nuggets of goodness here but it’s a little too few and far between for my liking. Probably the weakest season opener since Martha’s first appearance (another story that features a Judoon, strangely) but come back next week and see if the second part of the Season 9 premiere can salvage this story.