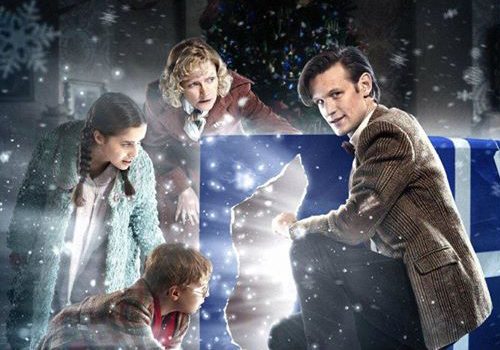 Review: Doctor Who – The Doctor, the Widow and the Wardrobe

Dear Santa, can we have a better episode next year? I’ll be super-good. Super-special-awesomely-good. Promise.

It’s Christmas Eve, 1938, when Madge Arwell comes to the aid of an injured Spaceman Angel as she cycles home. He promises to repay her kindness – all she has to do is make a wish. Three years later, a devastated Madge escapes war-torn London with her two children for a dilapidated house in Dorset. She is crippled with grief at the news her husband has been lost over the English channel, but determined to give Lily and Cyril the best Christmas ever. The Arwells are surprised to be greeted by a madcap caretaker whose mysterious Christmas gift leads them into a magical wintry world. Here, Madge will learn how to be braver than she ever thought possible. And that wishes can come true. The Doctor, the Widow and the Wardrobe marks the second year in a row that Moffat’s written a Christmas episode for Doctor Who and if next year’s isn’t a parody of The Great Escape, I’ll be very f***ing surprised. We get it, Steven, it’s Christmas. That’s not an excuse to make quirky, whimsical episodes based on films that are on every bloody year to save yourself some time. We let you away with the Christmas Carol but a C.S. Lewis rip-off? You’re better than that, sir.

As you can probably tell, I’m not a fan of this episode. It’s not even that it’s bad, it’s that is smacks of laziness and an overall lack of effort. The kids are forgettable, especially Maurice Cole, who needs to stick to his day job as the Milky Bar Kid. Claire Skinner is unconvincing in her role as a mother and her resolution is trite at best. Alexander Armstrong and Bill Bailey are wasted in their minimal roles but at least Matt Smith is his usual great self, but even he can’t save the main story.

The story is boring, full of plot holes and utterly forgettable. Getting into spoilers for a second, through some time vortex shenanigans, Madge plucks her husband from the moment of his death and delivers him home along with his plane, they completely forget about Reg’s co-pilots as they are never mentioned again. So Madge left two innocent men to plummet to their deaths (since she took the plane too) just so her kids can have a nice Christmas. What a bitch.

Poor story, bad acting and underutilised talent adds up to a very weak episode that plods along, not really building up any tension or momentum. And that’s it for the main story because after the main detritus is done with we get to something that goes a long way to redeem the episode.

The Doctor, after being convinced that he shouldn’t be alone on Christmas, goes to see a couple old friends. We finally get a reunion of Amy, Rory and The Doctor in a scene that is so full of sweetness, humour and emotion that it almost quelled my disappointment in the A-Story. Almost. I highly recommend finding this scene out and if not, check out the episode itself but brace yourself for disappointment.

No teaser for next year this time but as soon as one shows up, you can bet that you’ll see it here on NO, YOU’RE a TARDIS! See you next year!

Tags: article, christmas, Doctor Who, TARDIS, television, The Doctor, the wardrobe, the widow