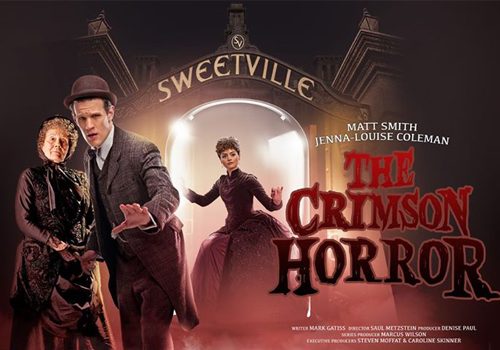 Review: Doctor Who – The Crimson Horror

We finally return to Victorian times to visit some old friends, uncover mysteries and let Diana Rigg remind us that she is a damn fine actress. Are you ready for the secrets of Sweetville to be unveiled? Well let’s get to the bottom of The Crimson Horror!

When bodies begin to turn up in the canal afflicted with a look of terror and a scarlet hue, this naturally earns the interest of Jenny and Vastra: Rescue Rangers. With their Sontaran footman in tow, they set out to infiltrate Sweetville, a factory-come-gated community that has something of Willy Wonka about it but somehow less insidious. It’s naturally a front for Mrs Gillyflower and her silent partner Mr. Sweet’s grand plan of poisoning the planet. The Doctor and Clara have already fallen foul of this plot and it’s up to Jenny, Vastra and Strax to save the day.

How can you not love these two?

I really enjoyed this episode, Mark Gatiss as writer is in his element, the creepiness of Sweetville is much like a watered down version of Royston Vasey. Diana Rigg’s performance as the insane, manipulative Mrs Gillyflower is one of the better villains of this season. She’s pure evil and Diana Rigg conveys her unrelenting zealotry beautifully. Her silent partner is revealed to be a Red Leech that has attached itself to her and formed a symbiotic relationship. Mr Sweet is kinda cute for a horrifying crab leech thing.

Look at this horse, it’s less than amazing!

This episode is also pretty damn funny! Jenny and Vastra are always a fun couple to be around and their interaction with regular denizens of the time period is often slap-sticky and fun. As with every other episode featuring this trio, Strax steals the show. Between a sugar rush assault on Sweetville to killing horses because they fail him., Strax is often the funniest part of any episode featuring him. Unfortunately, he had to share the same scene as “Urchin Boy”, as he’s named in the credits but “Thomas Thomas” in the episode. F*** this character. It’s a GPS gag. It started out as a weird juxtaposition of GPS speak coming from a street urchin that I thought was a sly hint at something unsettling but no, it’s a f***ing TomTom gag. Sorry for swearing but it’s a really fucking stupid gag and I hate it. I hope the poor kid who had to act that part gets better roles in the future, I’d hate for his sole entry on IMDB page to be “F***ing TomTom Kid”.

You and me both, Strax

Venting over. Calm blue TARDIS. The episode ends on an interesting note. The kids that Clara looks after have twigged onto her being a time-traveller without ever seeing the TARDIS or interacting with the Doctor. Them some clever kids! They threaten to tell their father of Clara’s escapades, which is stupid but perfectly reasonable kid logic, unless she takes them travelling with her. For the second time (but not wiped away by a “big friendly button”) Clara is made away of her past life as she sees a picture of her Victorian counterpart amongst the pictures from different time periods. I hope to see this kick-off next episode when Clara confronts the Doctor.

Next week we step into twisted realms of Neil Gaiman once again and see the return of the Cybermen. This episode is looking to be a real Nightmare in Silver.