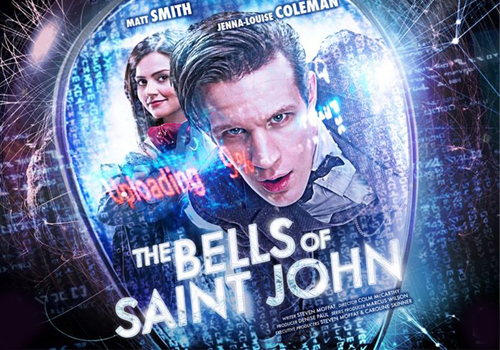 Review: Doctor Who – The Bells of St. Johns

Doctor Who returns to our screen with a bang but with a brand new companion and a brand new sub-plot. Will the second half of Season 7 be up to snuff or will be the secret behind Clara be a complete non-starter? Ask not for whom The Bells of Saint John toll. They toll for thee.

The first thing that should be said about this episode is that it’s pretty much just a 21st Century take on the second season episode The Idiot’s Lantern, but with wifi instead of old televisions. The two episodes share a lot in common, too much in fact which has lead to cries of plagerism and I’m kind of inclined to agree. Sure, there’s some things to distinguish it but not much.
Still, it’s an immensely fun episode with an interesting villain so let’s give the plot a quick run-down. SPOILERS ┓┏ 凵 =╱⊿┌┬┐ AHEAD

A strange wifi signal is stealing the souls of those who access it, all under the command of a returning villain, The Great Intelligence, (played by the returning Richard E. Grant, maybe he won’t be wasted after all!) and the Doctor’s search for the mysterious Clara is thrown into the middle of this. Clara is so much like Victorian Clara, something the Doctor is keen to point out but not entirely reveal. She’s just as excitable, quick-witted and smart as her other incarnations but I do miss Vic-Clara. After losing her twice already, the Doctor is very protective of her straight out of the gate, including a message to the villains declaring her under his protection. ┓┏ 凵 =╱⊿┌┬┐

One of the things I have to congratulate the show on this time round is the cinematography, which seems to be taking a couple pages out of Sherlock’s book, with huge sweeping camera movements and one particular shot that follows the Doctor from the street outside the TARDIS, inside, around the control room and back out into the cabin of a plummeting jet plane. While it has obvious cute points, they did their best to make it look like one long steady cam shot, a tough thing to pull off given how the TARDIS moves around.

Looking at fan reaction online, this episode has been pretty divisive but I enjoyed it. It was fast-paced, it was fun and foreshadowed a lot of stuff to pay off later. The Doctor/Clara dynamic is enjoyable to watch and I’ll be glad to see where this season goes. See you guys nex–

Where… Where am I?

[How will our hero get out of the wifi? Find out next week on No, YOU’RE a TARDIS!]