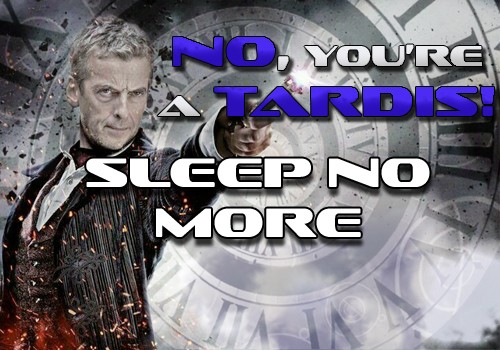 Review: Doctor Who – Sleep No More

Well… That was… Interesting, I guess? Not gonna lie folks, this one has me quite perplexed. I liked it. It was good. But I keep asking the same question of Sleep No More:

What was the point? What Mark Gatiss has written here is a very intriguing concept, with a fantastic directorial style (big-ups to Justin Molotnikov, survivor of other BBC prime time show; Atlantis and Merlin) and some truly creepy villains but ultimately… It just doesn’t go anywhere.

The found-footage angle is intriguing and very early on, as soon as Clara’s viewpoint becomes a thing, you start to question it (or, at least I did) and you start to try to second-guess the episode. I was thinking nano-bots and I was kinda right. Kinda.

Nothing is as it seems with this episode and I think that’s by design. Mark Gatiss has often played his Who and Sherlock writing fairly straight but let’s not forget that this is one of the twisted minds behind The League of Gentlemen and a writer for the reboot of Randall & Hopkirk. Mystery and weirdness are second nature to this guy.

The best way to describe the episode is dream-like. It has an other-worldly, ethereal feeling to it, like it’s not quite real and that ambiguity plays into why I think many are unsure how to take this episode. It’s got some amazingly strong ideas but the overall vagueness is so unlike every other episode in this season so far that I think it’s alienated more than a few viewers.

It’s a great episode but it’s definitely an odd one that requires deeper analysis than this humble reviewer is capable of. Someone more attuned to psychological tropes might be able to do something astounding in terms of analysis.

That’s all I’ve got for now folks but be sure to come back next week as we greet some old faces and say goodbye in Face the Raven.