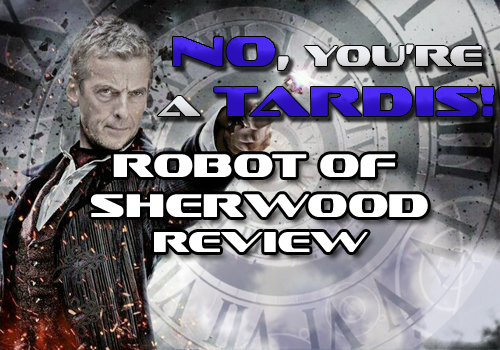 Review: Doctor Who – Robot of Sherwood

“Because, unlike some other Robin Hoods, I can speak with an English accent.”

We set course for merry olde England this week with Robot of Sherwood, written by the writing luminary Mark Gatiss. This was a pretty fun episode as The Doctor takes Clara to meet one of her childhood heroes, Robin Hood. The Doctor, cocksure that this legendary figure is mere fiction, soon finds his match in the dashing rogue who seems a little too good to be true.

The guest stars this week are pretty damn stellar, with Tom Riley (Return to House on Haunted Hill, St. Trinian’s II) playing Robin of Loxley and Ben Miller (Armstrong & Miller, Johnny English) as the Sheriff of Nottingham. Unfortunately, Ben Miller is pretty forgettable in his role, playing the Sheriff as you’d expect the sheriff to be played and as we’ve seen before. He’s the baddie, that’s it. Interestingly, his demise in the episode was changed. He was originally revealed as a robot after being decapitated but in light of recent high-profile news events, that was deemed inappropriate. The Sheriff’s robotic knights appear to also be in search of “The Promised Land”, same as Mr Half-Face in the first episode. Curiouser and Curiouser…

Tom Riley, however, is in a league of his own this episode. He plays Robin so camp that it borders on parody but is so earnest in his performance that you can’t even be annoyed by him, especially as he reveals that his joyful nature is just a facade to hide a broken heart. His antagonistic banter with the Doctor is pure joy to watch as they goad and wind each other up, much to Clara’s chagrin. Once he finds out his status in history, he doesn’t shy away from his legacy and even gives the Doctor something to think about and that goes a long way to making him a character I hope returns.

Capaldi is on top form this episode, with more of a “no fucks to give” attitude than last time. His skepticism of Robin Hood’s existence, the arrow shot into his TARDIS, and then the sly finger he gives to Robin really shows of the animosity the Doctor has toward Robin. He even breaks out some Venusian Karate on him! By the end, however, the Doctor relents and even leaves him a gift, the lost Maid Marian.

Overall, a solid episiode with fun and fights for all the family! Next, we peek through the looking glass so be sure to Listen…