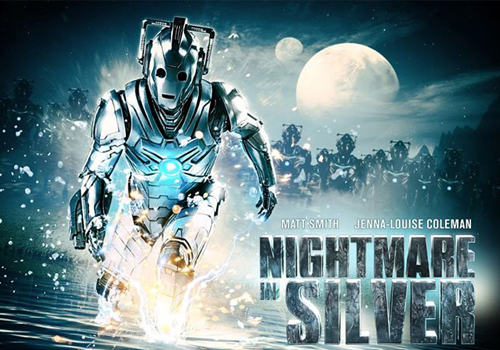 Review: Doctor Who – Nightmare in Silver

♫~We’ll begin with a spin, traveling to a world of Gaiman’s creation. What we’ll see will defy expectation~♫ Welcome to Nightmare in Silver.

Hold your breath. Make a wish. Count to three. After some truly mediocre and downright awful episodes in this half of the season, this was going to be my highlight. Neil Gaiman, Warwick Davis and the return of the Cybermen? You’re damn right this is an awesome episode! Fun banter, astounding actor performances and an atmosphere of dread and tension pack this episode with everything a great Who episode is and what Gaiman has delivered before.

Following on from last week, this is the kids first (and hopefully last) outing with the Doctor and Clara. Travelling to the Hedgewick’s World of Wonders, a theme park sadly now abandoned apart from a kooky man in a top hat, a rag-tag platoon of the worst soldiers an Empire can offer and a mysterious little man by the name of Porridge. What unites these lost souls and how can the Doctor fight the enemy within and without?

The new Cybermen design is brilliant! It’s sleeker but no less powerful looking. We learn that during the 1,000 year long Cyber-Wars (a callback to the 5th Doctor story, Earthshock) that the Cybermen have upgraded themselves to a state of near indestructability. They’re faster, stronger, not so weak to gold and they walk like Robocop now! Their new ability to adapt quickly is quite reminiscent of The Borg, along with their capacity to convert all organic species quickly and easily using Cybermites. This is a huge improvement and definitely a step in the right direction in making them a formidble fighting force again. In their efforts to become more powerful and destroy all organics, the Cyber-Planner infests the Doctor and this is where Matt Smith shines as he plays the steadfast Doctor, resisting and fighting to regain his mind and the Cyber-Planner, using his memories and Timelord knowledge to taun both the Doctor and his companions. Smith plays schizophrenic really well and I love the Cyber-Planner, he’s trying to play Clara and using other Doctor’s catchphrases. He’s amazing!

“I have seen the enemy, and he is a handsome devil!”

Speaking of Clara, she really steps up in this episode and shows us why the Doctor trusts her. Just like her previous incarnations, her sheer force of will and personality can make anyone follow her into battle and even fall in love. Warwick Davis plays Porridge, a mysterious guy who is hiding some deep secret and holding on to a lot of guilt, and he’s a great character and yet another one that I hope returns. Finally we come to the Maitland children who are essentially bargaining chips/meat shields to drive the plot forward. Artie is alright but Angie is a right cow but I guess that fits her MO as moddy teenage girl. I hope they never travel in the TARDIS again.

Nightmare in Silver is a fantastic episode and I cannot recommend it highly enough. You should be watching it right now! GO!

Next week sees this season end with The Name of the Doctor and secrets shall be revealed but for now, check out this prelude to the finale.