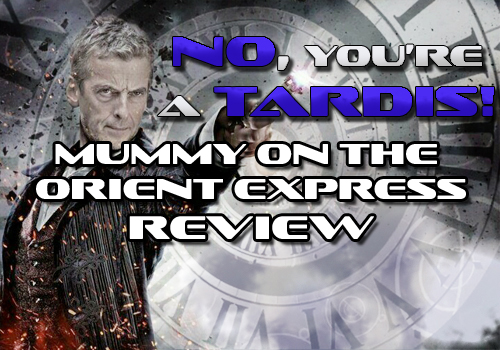 Review: Doctor Who – Mummy on the Orient Express

THREE WEEKS! That’s all it took for Clara to go back to the Doctor. And people say Danny/Clara is an abusive relationship.

This week’s episode is definitely an episode of two halves as the Doctor/Clara dynamic ends up coming off as a severe case of Stockholm Syndrome and this plot line book ends an immensely entertaining, dark, and clever story. The Clara Backdown continues as this episode only serves to highlight that she is entirely wrong for this Doctor. Sure she’ll challenge the Doctor on occasion but she just comes running back and that’s dumb. It lacks the soul that Donna/10 had, where Donna challenged the Doctor but stayed with him in spite his questionable actions because she knew, at that time, he needed her to keep him in line. Clara worked for the whimsical “fairy tale” 11th Doctor but feels out of place for the more cynical, pragmatic 12th Doctor.

Mummy on the Orient Express‘s main plot is pretty interesting as the entire trip is an orchestrated plot by an amoral AI to gather a bunch of scientists to solve the riddle of an ancient mummy curse before it kills them all. It’s got shades of Portal with Gus acting as our GLaDOS, purposefully hiding details about the Foretold that it knows to test the assembled scientists. This AI has been present for several previous attempts to unlock the mysteries of the Foretold, possibly for military purposes, where everyone has died and Gus has ranked their progress. It’s the kind of “throw bodies at the problem” mentality that we’ve come to expect from rampant but affable AI. The Mummy is an interesting take on the monster idea, as it’s an ancient undead soldier from a long forgotten ware and it’s curse is a result of tech keeping him going, unable to rest.

Capaldi has some interesting pieces in this episode. He proves he’s a more pragmatic Doctor than others, all too aware that people will die here before he solves the mystery. He’s even unintentionally funny as he talks to those about to die with the kind of disrespect he’s given to people before. The only person he seems to have a passing respect for is Perkins, the train’s Chief Engineer. Perkins is played by notable British comedian and massive Who fanboy, Frank Skinner. This role is perfect for him and Perkins comes off as one of the most engaging and interesting side-characters we’ve had all season. It’s another case of hoping he’ll make a return in the future because his performance was brilliant.

Mummy on the Orient Express gets a stamp of Must See. Despite Clara being… well, Clara, this episode has a fantastic premise, a chilling monster and enjoyable side characters. Be sure to come back next week when we Flatline.