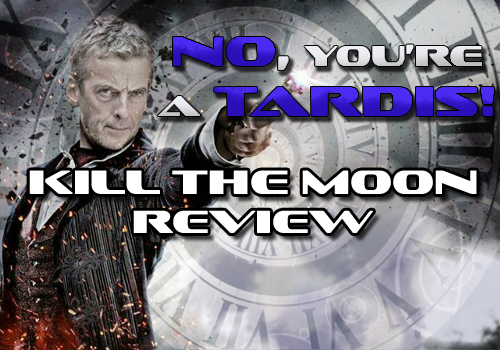 Review: Doctor Who – Kill the Moon

Yeeeeeeah, I wouldn’t touch the subtext of this episode with a ten foot clown pole…

Kill The Moon could be considered our Doctor-Lite episode for this season and, given it’s premise, could be a pretty strong episode and while I was under the assumption that this would be a horror episode, what we inevitably got was pretty interesting.

The outset of this episode sees the Doctor kowtowing to Clara’s bitching. Oh boo-hoo, Courtney Woods, the annoying student from last time, doesn’t feel special. I’m actually with the Doctor on this. Why does it matter? Plenty of former companions struggle with the idea of life sans-Doctor but this girl went on ONE trip AND threw up when presented with the majesty of the universe and is using it as an excuse to act up, it’s bullshit. But whatever, the nagging nanny gets her way and Courtney is accompanying us for this story.

I will say, despite the stupidity of this set-up, Courtney isn’t quite as insufferable as I expected. She’s a pissy teenager sometimes (but what teenager isn’t?) and even comes across as a decent person underneath her bravado. It’s Clara’s insistence that she comes along that pisses me off. Clara, who knows full well how god damn dangerous ANY trip in the TARDIS can be, even gets angry about the presence of the dangerous space spiders when I don’t feel she really has any grounds to, considering she forced him to bring the kid along. “Duty of care”, pft.

Speaking of the space spiders, we don’t really get a name for them, they’re just large bacteria so SPACE SPIDERS it is. They’re creepy, well-designed and could have easily been the focus of a fantastic Alien homage if it wasn’t for the plot focus.

The Moon is an egg. I’ll let that sink in for a second. Okay, great premise and it presents an interesting dilemma UNTIL you throw abortion subtext and have three women left alone to make this decision. How am I meant to comment on this? The subtext is so overt it borders on parody, so much so that at one point during the episode, I thought of the line from a recent episode of Dragonball Z Abridged: “This isn’t about a right to life, it’s about making a choice. A choice we both need to make. A choice between a terrible mistake that could ruin lives and-FUCK IT, I’m dropping the pretenses, we’re aborting Cell.” Ultimately, I think this is more a test of humanity, much like the events of The Beast Below but unlike that episode, humanity decides to kill the innocent creature that means them no harm, because humanity are dicks.

Thankfully, Clara and Courtney have a last second change of heart and spare the creature resulting in a beautiful shot of the moon-egg cracking from Earth, with everyone watching as GHIDORA EMERGES TO DESTROY THEM ALL! Seriously, I hope they have Jaegers to deal with that problem later. The creature leaves behind another egg-moon so the Earth’s tides aren’t super-boned. And every goes home for tea!

UNTIL, Clara goes on a three-minute rampage where she proceeds to chew the Doctor a new one for not only putting such a massive burden upon her, her student and a stranger but for also knowing the outcome and making them go through such an ordeal. The Doctor explains that he left to allow them to make the choice as humans but Clara fires back that he was being patronising and given his history with the Earth, he was obliged to save his second home. Clara then does the unthinkable and orders him to leave and never come back. This is an emotionally charged and powerful scene and actually goes a long way to improve Clara as a character so if she quits being the perfect little tag along and starts acting like she has opinions other than the Doctor’s I will announce the start of the Clara Backdown Backdown.

Overall, an entertaining little episode, especially given last week’s bore-fest but next week we’re boarding our non-stop train to Murder-Town in Mummy on the Orient Express.