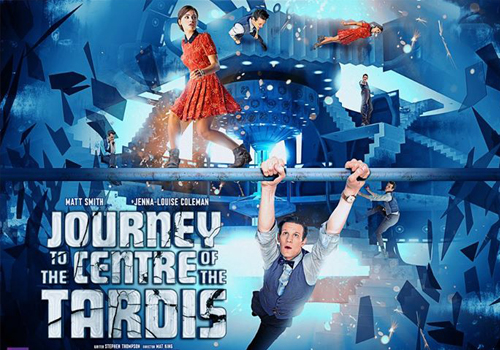 I can’t believe in the 50 years this show has been around not a single episode before this has had “TARDIS” in the title. Strap on your adventuring gear, get your notepads ready and let’s dive feet first into mystery and wonder as we take a Journey to the Centre of the TARDIS!

Journey to the Centre of the TARDIS starts out strong as the TARDIS is captured by a brotherly band of scavengers and the TARDIS interior is thrown into disarray. While the Doctor “gently coerces” the scavengers on a Clara-hunt, Clara herself is left to find her own way through the TARDIS’ labyrinthine corridors, discovering things along the way that are both wonderful and terrifying, as the TARDIS should be.

Nice to see the Doctor’s cupboard is as cluttered as mine.

Out of the guest stars this time, only Tricky is likable and it would have been nice to see him join as a companion, because seriously, I’m getting tired of modern era companions and having a future dude with robot eyes could be useful. His brothers are tall and stupid and short and dickish, respectively. But in a move that Moffat has used before, the dickish brother remembers what the Doctor told him before the timeline reset and treats him better from then on. It’s stupid and contrived but I like Tricky so at least he’s better off. Oh, yeah! Another time reboot, sure it’s only a couple hours but this kind of thing undermines an episode immensely, especially given what Clara learns about the Doctor. It’s right up there with “And it was all a dream” in the realms of bullshit status quo resets. I don’t think I can consider this a Doctor-lite episode despite the focus being on Clara exploring the TARDIS. They’re not seperated for long and we do see a lot of the Doctor’s efforts. It just feels like it should be have been a Doctor-lite episode and wouldn’t have lost anything. Hell, they could have built on the Clara/TARDIS animosity and have them resolve it as the TARDIS helps Clara avert disaster as the Doctor is offscreen doing something else but what we got was fine, it was still fun.

You shut your beautiful mouth, Clara!

What really made this episode for me was the continuity nods. I freaking LOVE continuity porn and this episode was drenched in it…. What? *Ahem* All the little nods and references are what I live for. I love it in MTMTE and I love it here. From the whispers in the console room (I quoted the 9th Doctor line used here to my friend Ryan while we were watching an earlier scene) and the swimming pool to the library (housing a book that I think every fan would love to have a flick through) and the telescope from Torchwood House and the 7th Doctor’s umbrella!
This episode was full of fun little details and it was great to see the layout of this new TARDIS.

Journey to the Centre of the TARDIS is fun but flawed. It has lots of interesting hooks and some great visuals but falls a little short of being the perfect episode for me. Next week we have the return of Mark Gatiss and something he knows a thing or two about. Mundane and wholesome exterior meets sinister and twisted morality. What secrets hide behind the gates of Sweetville? Join us next week as we come face-to-face with The Crimson Horror.