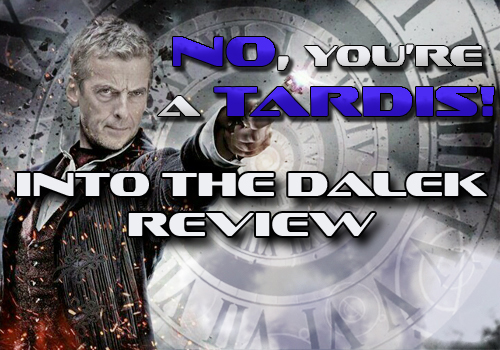 Review: Doctor Who – Into the Dalek

Well, that was mediocre.

I realise I may catch some flak for that but screw it, not every episode is going to be golden and this is just about as “paint by numbers” as you can get. Doctor arrives on ship, Doctor finds Dalek presence, Doctor must rectify Dalek presence while soldiers are slaughtered, home in time for tea. This episode is basically here to show that “maybe the Doctor isn’t all that different from the Daleks he despises” and this was done by Eccleston so we’ll move on.

Lacklustre plot aside, this episode features some rather interesting pieces of character which I’m going to focus on and the first one is Danny Pink!

Oh, Danny… You gorgeous, but tortured, handsome bastard… Say hello to Clara’s new love interest, everybody! Now, I know it seems like I’m harping on this new addition to the cast and I kinda am BUT that’s only because I know how trope-y his character concept is. The true fun comes in the form of Samuel Anderson. Sam’s protrayal is an absolute delight, bringing a lot of charm to this soldier-turned-teacher. Word is that he’s going to be coming aboard the TARDIS as a companion could lead to some interesting dialogue between him and the Doctor, since they seemingly share a similar tragic backstory.

Missy makes another appearance and now we seem to have established her modus operandi, snatching people from the moment of their (sacrificial?) death. If this turns a bit Exiles and she’s gathering a time-spanning Dirty Dozen, I’ll be all for it but really, this can’t be in aid of the Doctor. This is some nefarious scheming of the highest order and continually referring to this place as Heaven doesn’t help that. Anything angelic is bound to be super-evil, we’ve been conditioned to know this. Michelle Gomez is perfectly cast in this role, as she can come off as silly but sinister really well.

Kicking the door open cracks me up.

Peter Capaldi is coming into his own now and I’m getting a feeling for his character and that is of an absolute dick. I honestly really enjoy this take on the character because, at this point in his 2,000+ year life, he has enough of everyone’s shit. The near infinite interior of the TARDIS cannot hold the amount of fucks he is unwilling to give. He’s mocking, purposefully forgetful (that’s how I take it, anyway), sarcastic and I am pleased as punch at this development. I can only hope that this continues as we go forward.

Next week, we’ll be going back in time as we take on the Robot of Sherwood!