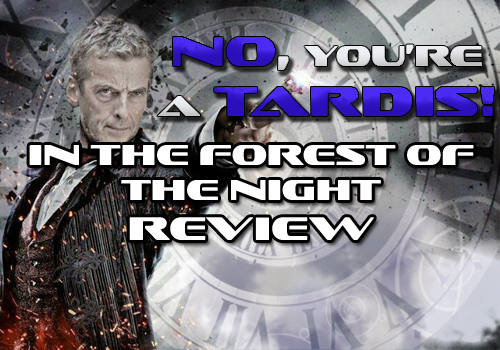 Review: Doctor Who – In the Forest of the Night

Hug the trees! Trees are your friends!

A forest covers the Earth over night and the Doctor must solve this mystery sans his trusty sonic and with a class of children following him around. In the Forest of the Night is a solid episode, maybe only let down by the child cast but what production isn’t?

This episode’s setting is about as fantastical as it can get, London is overgrown by a giant forest and the cast spends the majority of the time wandering through it. As Danny Pink points out “I’m downright enchanted.” The odd bus or monument makes the forest feel, ironicall, unearthly. There’s a feeling of dread about the place and as the Doctor and Clara both agree, it’s like the forest in everyone’s nightmares. This is a nice red herring, especially the bogeyman themes they played with in Listen earlier in the season.

Capaldi is full of sass in this episode and it’s funny for it to be directed at dumb-looking children for a change and to even be dumb-founded himself by the mind of an innocent. The dynamic between The Doctor and Maebh (That’s how it’s spelt but it’s pronounced Maeve so I may use that just for ease) is really fun. The rest of the kids are annoying as hell and mildly racist? I dunno, there’s one scene where a shit bag kid shines a torch into the face of a black kid because he’s “darkness-phobic” and comes off a tad weird to me.

Danny Pink gets to shine as a teacher and comes across as the kind of teacher every kid deserves. Compassionate, caring and take charge when presented with a problem. If anything, it just goes to show how terrible at her job Clara is as her only concern is The Doctor. Danny, further proving how much better he is as a character than Clara when he reassures Clara that the Earth and humanity have plenty of wonders for him and approaches Clara’s pathological lying in a really adult manner, almost as if he was talking to a student, which I find quite funny.

Clara on the other hand, goes full retard in this episode. She’s worse than Rose and that’s me saying something. At least Rose, on occasion, knew when to prioritise the important stuff. Clara loses track of a vulnerable child TWICE, doesn’t inform the parents of her students that they are okay and is only paying attention to The Doctor. Her continued lying to the awesome Danny Pink is also notable because it’s just a shitty thing to do. In the only strong scene that Clara has, she implores the Doctor to leave when the situation appears truly hopeless. The Doctor tries a counter-argument, using Clara’s own speech from Kill The Moon but Clara delivers a coup de grace and that’s it. It’s a pretty powerful scene and I will give credit to the actors for their delivery.

The mystery of the forest is resolved when Maeve, who hears voice, can communicate with the trees and it’s pretty obvious that the forest is there to protect the Earth from an imminent solar flare (even if The Doctor catches on about 3 minutes after the audience would have done) and the conflict is resolved and Maeve’s sister (who went missing a while ago) returns. Everyone goes home for tea.

This episode is pretty forgettable and it’s pretty flawed. The Clara Backdown continues, there’s some really ropey CGI and the ending can be considered a little trite but ultimately it will be forgotten and after the trailer for the next episode, who can blame people for doing so? Join us next time as we see the return of UNIT, the Cybermen and Missy as we enter the Dark Water.

Tags: Doctor Who, In the Forest of the Night, review, television, The Clara Backdown