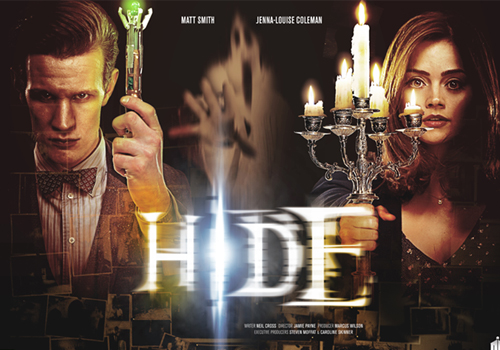 From the height of the 80’s last week to the 70’s this week, the Doctor and Clara offer their help to an intrepid ghost-hunter and his empathic assistant. Can Neil Cross vindicate himself of the boring Rings of Akhaten with this spooky haunted house tale? Let’s see if he can because from my critique, there’s nowhere to Hide.

As it turns out, he can! I may have given him stick for his debut episode but he won me back with Hide. The atmosphere is thick with tension from the get-go and between the otherworldy locations and the monster of the week is perfect nightmare fuel for the kids (and even some adults I’ve spoken to). One thing I’m thankful for is that they get the two big cliches shortly after the credits roll. The “Doctor who?” running gag is subverted by Professor Palmer and they get the obligatory Ghostbusters reference out and not try to shoehorn it in later which helps the episode immensely.

“Oh, this old thing? Got it fighting SATAN!”

Professor Palmer and his assistant are played by Dougray Scott and Jessica Raine, respectively. I don’t know the former from anything but I know the latter from her role in Call the Midwife (it was always on in the background as I worked at the computer, honestly) Their relationship is very Doctor/Companion but with the sickening romantic element that ruins most Doctor/Companion dynamics. That’s right, Rose and Martha are terrible companions and y’all can suck it if you disagree! Donna Noble FTFW!

As with other DW ghost stories, the ghost is not a ghost but Old Man Wilkins! Nah, it’s a dimensionally-displaced pioneer time-traveller and yes, that’s the easiest way to describe her. The monster of the week never gets named on screen but its name and appearance is some proper Silent Hill nightmare fuel. It’s this grotesque, distorted humanoid crab thing and it’s great and its name is PERFECT! I’ll not reveal it but if you care to look it up or keep an eye on the credits, you’ll agree. I don’t like the resolution, it feels a bit stupid to me but hey, no one dies and that’s always a good day for the Doctor.

This episode also marks some development for Clara, with her having the typical Companion realisation about time-travel (things die, yo) and confronts the Doctor and the conversation is phrased in such a way that it can mean both humanity and his companions and the Doctors answer has a double meaning relating to humanity as a whole and Clara herself. It’s pretty cool. The TARDIS and Clara also finally have a bit of a barney which I was glad for. Clara sassing the box and the box responding in kind is great but they put aside their animosity towards each other to save the Doctor. I hope we see a little more of that next week.

Hide is an immensely enjoyable episode and redeems Neil Cross for me. It’s tense, creepy and genuinely terrifying in parts. The characters are engaging, the monster is scary and nobody dies, so it’s good times all round! Come back next week as we truly take a step into the unknown as we take a Journey into the Centre of the TARDIS.