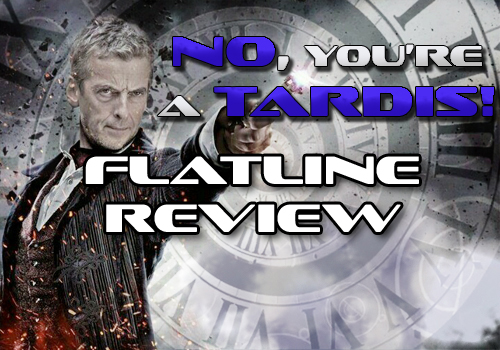 Humour, character and genuine horror elements? This is probably the best episode of the season!

While Mummy on the Orient Express could be considered the Companion-lite episode, this is most definitely a Doctor-lite episode, where the Doctor is trapped inside a tiny TARDIS while Clara assumes the role of the Doctor to solve a mystery and stop an invasion.

First up, the new enemy! “The Boneless”, as the Doctor dubs them, are beings from a two dimensional realm, probing and dissecting humanity until they can transfer into our dimension. They’re a fascinating new bad guy and I tip my hat to Jamie Mathieson (who also wrote last week’s episode) for their concept. These guys are Weeping Angel tier of terrifying new threat but I hope they’re used a little more sparingly than the Angels were.

Capaldi, though side-lined and suffering from bad hair continuity, does a good job of working things out despite the disadvantage. Naturally, being trapped in a tiny TARDIS leads to some rather funny moments with his face and hands, even though the effect can look especially ropey in some places. The Doctor activating Siege Mode presents an interesting question, since it appears to be the Pandorica and the final scene is especially good but I’ll get to that.

The Clara Backdown is postponed because she’s actually a good character this week. It’s weird, the first half of the season she was mostly insufferable but now she becomes good every couple of weeks! Trying to get a thing going here, show. But, yes, Clara plays her version of the Doctor superbly and has a great rapport with her companion, Rigsy (who is also fantastic in this episode) and can even get harsh with the jackass Fenton (played by Christopher Fairbank, whom I last saw in Guardians of The Galaxy).

The Doctor and Clara dynamic has it’s first real sign of coming undone. Clara, feeling full of herself, keeps prodding the Doctor to tell her she was a good Doctor and he relents finally and agrees. But says that “goodness” had nothing to do with being a good Doctor. And Clara shows a quick flash of realisation. The companion becoming as dark as the Doctor is something that was played with by Rory. When told by the Doctor to make the choice between the present Amy Pond or the older, battle-scarred Amy who never stopped loving him, Rory screamed at the 11th Doctor that he was “turning me into you!” so while Clara acting more like Capaldi might make for a good episode, ultimately, it’s the sign of the end drawing near. As is Missy declaring “My Clara, I’ve chosen well” to an iPad before cackling like a Vaudeville villain.

Flatline is an interesting, terrifying and entertaining one-off episode and I can’t recommend it enough. Next week we’ll have more mysteries and the return of Danny Pink in In the Forest of the Night!